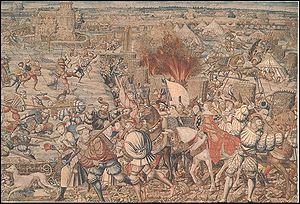 The Battle of Pavia (1525)Alonso Pita da Veiga, born in Ferrol in 15th century Galicia, Spain, was one of the most remarkable officers of the Spanish Tercios fighting under the orders of Count Fernando de Andrade in the Battle of Pavia (Italy), and in other battles of the Italian Wars between the years 1513-1525. He was granted the right to display a coat of arms, and was granted land and property in Ferrolterra, his birthplace, for having participated in the capture, on the battlefield, the king of France, Francis I. The decree granting a coat of arms to Alonso Pita da Veiga, was archived at the General Archive of Simanca (Archivo general de Simancas, legajo 388, rotulado de "Mercedes y Privilegios.’) and was issued by Emperor Charles V on 24 July 1529, four years after the Battle of Pavia. A verbatim text of the decree can be found in, among other 19th Century Spanish books, in the book, "Crisol historico espanol y restauracion de glorias nacionales", published in Havana, Cuba in 1862 by the Spanish historian Jose Ferrer de Couto. A summary of the document, in English translation, gives the following details: "Alonso Pita da Veiga, Galician, and our vassal" served his majesty well in several battles including the Battle of Bicencio and the Battle of Vicoca. In regards to the Battle of Pravia, the decree states that Alonso Pita da Veiga recaptured the standard " ... of His Most Serene Infante Don Fernando, who is now King of Hungary, Our most dear and loved son and brother, which bore the insignia of Our Duchy of Burgundy, which the French had taken when the standard-bearer was killed”. This refers to the standard of Ferdinand, the brother of Charles V, whose troops fought at Pravia. For this action, Alonso Pita da Veiga was awarded 600 gold ducats. In regards to the capture of King Francis I of France, the decree states "and in the same battle, you accomplished so much that you reached the person of said King (Francis I of France) and captured him, jointly with the other persons that captured him.” So, in effect, Charles V credited a group of individuals, and not a single individual, with the capture of King Francis I. For that action, Alonso Pita da Veiga was awarded the sum of 30,0000 maravedís per year, for life, "above and beyond your pay as an 'hombre de arma'". "Hombre de arms" was a term used in that era to signify a mounted warrior as opposed to a foot soldier. The decree states that Alonso Pita da Veiga took from Francis I of France the following: " and you took from him his left gauntlet and a brocade decorated with four crosses of silver cloth and a crucifix made of the True Cross, of which events the same King of France gave testimony in a document signed by his own hand." The decree then awards Alonso Pita da Veiga a coat of arms, described in the decree, that incorporates the different elements of his deeds at the Battle of Pravia: “A coat of arms, quarted, the first quarter colored the color of blood and in it a gauntlet as a symbol that you took said King of France, and a royal Crown of gold above of said gauntlet; and in the lower quarter, a blue field with three gold fleur-de-lis which are the true arms of the Kings of France; and in the right quarter with the field colored as the superior quarter and in it the brocade decorated with its crosses; and the left quarter, likewise colored, and in it the said standard of the Most Serene King of Hungary with the arms of Our Duchy of Burgundy.”