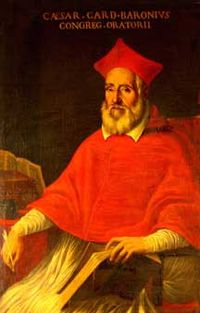 Cesare Baronio August 30, 1538 – June 30, 1607) was an Italian Cardinal and ecclesiastical historian. Baronio was born at Sora, and was educated at Veroli and Naples. At Rome he joined the Congregation of the Oratory in 1557 under St. Philip Neri and succeeded him as superior in 1593. Pope Clement VIII, whose confessor he was, made him cardinal in 1596 and librarian at the Vatican. At subsequent conclaves he was twice nearly elected pope, but on each occasion was opposed by Spain on account of his work on the "Monarchy of Sicily," in which he supported the Papal claims against those of the Spanish government. Baronius is best known for his "Annales Ecclesiastici", undertaken at the request of St Philip Neri as an answer to the anti-Catholic history, the "Magdeburg Centuries". After nearly thirty years of lecturing at Santa Maria in Vallicella on the History of the Church and being trained by the Order as a great man for a great work, he began to write, and produced twelve folios (1588–1607). In the "Annales" he treats history in strict chronological order and keeps theology in the background. Another great historian, Lord Acton, called it "the greatest history of the Church ever written". It was in the Annales that Baronius coined the term "Dark Age" (saeculum obscurum) to refer to the period between the end of the Carolingian Empire in 888 and the first inklings of the Gregorian Reform under Clement II in 1046.


In spite of many errors, especially in Greek history, in which he had to depend upon secondhand information, the work of Baronius stands as an honest attempt to write history, marked with a sincere love of truth. Sarpi, in urging Casaubon to write a refutation of the "Annales," warned him never to accuse or suspect Baronius of bad faith, for no one who knew him could accuse him of disloyalty to truth. Baronius made his own the words of St Augustine: "I shall love with a special love the man who most rigidly and severely corrects my errors." He also undertook a new edition of the "Roman martyrology" (1586), which he purified of many inaccuracies. He is also famous for saying, in the context of the controversies about the work of Copernicus and Galileo, "The Bible teaches us how to go to heaven, not how the heavens go". This remark, which Baronius probably made in conversation with Galileo, was cited by the latter in his "Letter to the Grand Duchess Christina" (1615). Cardinal Baronius left a reputation for profound sanctity which led Pope Benedict XIV to proclaim him "Venerable" (January 12, 1745). In 2007, on the 400th anniversary of his death, the cause for his canonization, which had been stalled since 1745, was reopened by the Procurator General of the Oratory of St Philip Neri.The restorations which Baronius made to his titular Church of Sts Nereus and Achilleus and in the Church of St Gregory's on the Caelian still attest to his zeal for decorous worship. But the "Annales" constitute the most conspicuous and enduring monument of his genius and devotion to the Church.