Ferrara is situated in Northern Italy between the Adriatic coast to its east, and Modena and Bologna to its west. The 15th century duchy was directly south of the Venetian controlled Veneto region, and north of central Romagna. The city (or commune) of Ferrara is the capital city of the modern province of Ferrara, and in the region of Emilia-Romagna.

The first time Ferrara is mentioned in the historical record is in a state document of the Lombard king Desiderius. In 753 AD it is referred to as as a city forming part of the Exarchate of Ravenna. Desiderius created Ferrara as a fief called ducatus ferrariae ("Duchy of Ferrara") to Pope Stephen II (757). After 984 it was once again an imperial fief, made up of the counties of Tedaldo, Modena, and Canossa, ruled by a nephew of Holy Roman Emperor Otto I. It asserted its political independence, and in 1101 was taken by siege by the countess Matilda of Tuscany. Up until this time it had been ruled by several princely families, among them the prominent Adelardi family. Guglielmo II of Adelardi, the last of the House of Adelardi, died in 1146, and his rule and territorial possessions to his niece the Marchesella, by her marriage to Obizzo I of Este. 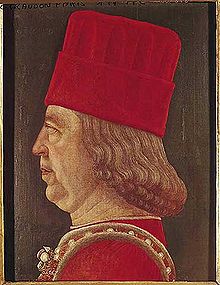 There ensued many years of power struggles between other powerful ruling houses and the Este. However, in 1242, Azzo VII d'Este became "perpetual podestà" of the city. Obizzo II (grandson of the podestà) was made perpetual lord over the city by the populace. After 1259, the Este were the sole rulers of the duchy: made up of territory radiating out from the city-states of Ferrara, Modena, and Reggio. The Este's relations with the pope were good, and in 1452, Borso d'Este (pictured at left) was given the rank of duke of Modena and Reggio, held in fief for the empire. After several years of stable rule, Borso was created duke of Ferrara by Pope Paul II (Anea Silvio Piccolomini). His half-brother Ercole I (1431 - 1505) became duke and remained in power from 1471 until his death. Though Ercole came to power by a violent and bloody coup, he was highly esteemed by his contemporaries for his strong, stable government.By the end of the 15th century, the House of Este was perhaps the most beloved of all the noble families in Renaissance Italy.

Independence from the Papacy

In 1482-1484 Ferrara fought a war with Venice, which (was backed by Ercole's enemy, Pope Sixtus IV), for control of the salt monopoly - known as the War of Ferrara. Ercole lost the war but by relinquishing some of his territory at the Peace of Bagnolo, he allowed Ferrara to escape being added to the Papal States. The war was a hard loss for Ercole, who lost control of the salt mines and had to watch immobilized during an illness as the pope's army destroyed Este properties at the edges of his provinces. The outcome actually enabled Ferrara to retain its political independence throughout the tumultous 15th century. Ferrara remained neutral in the Italian War of 1494-1498, and Ercole tried for the rest of his reign to remain friendly with the Papal States. He reluctantly agreed to the marriage of his son Alfonso to Lucrezia Borgia (1501), a marriage that brought extensive territorial gains, exemptions from papal census fees, and over 100,000 ducats in cash. In total, according to Sarah Bradford's estimate, Lucrezia's dowry brought over 400,000 ducats in land, jewels, plate, and cash. This is roughly equivalent to today's value of about $40,000,000 or £25,000,000.

Ferrara under Ercole I d'Este became a mecca for artistic talent. He poured his wealth and energy into attracting and employing some of the best musicians in Europe, including the great Josquin de Prez, and native sons Matteo Maria Boiardo, author of Orlando Innamorato, and Ludovico Ariosto, author of Orlando Furioso. Alfonso I, son of Ercole, was also an important patron; his preference for instrumental music resulted in Ferrara becoming an important center of composition for the lute. The architecture of Ferrara benefitted from the genius of Biagio Rossetti, who was asked in 1484 by Ercole I to redesign the plan of the city. The resulting "Addizione Erculea" is one of the most important and beautiful examples of renaissance city planning and is protected as a UNESCO World Heritage Site (Wikipedia).

Alfonso's rule was characterized not only by his marriage to Lucrezia Borgia, but also by his continued war against the pope. Julius II made serious attempts to conquer Ferrara, but Alfonso held him off and defeated the papal army at the Battle of Ravenna (1512). Alfonso II was a determined, forceful, uncouth man but was said to have grown very fond of his wife in his later years. He was also known to have been very adept and prolific in canon-building (notice most of his portraits are with his cannon). After years of peace, Alfonso II remained on good terms with both the pope and France, to whom his house would be linked with the marriage of his son Ercole II to Renée of France, daughter of Louis XII of France. The Este beautified, constructed many palaces,, and contributed to the Italian ad High Renaissance as conspicuously as the Medici in Florence. The legacy included the most advanced theatre, music, and civic planning of any Italian city of the age. The House of Este ruled Ferrara and Modena until 1597 when the male line went extinct. Pope Clement VIII then claimed the duchy as vacant - Ferrara finally succumbed to the authority of the pope. The Papal States had finally reached the largest extent of the realm with the addition of Ferrara.

Ferrara and the House of Este Photos: