The City of Saint John the Baptist

The Florentine Republic consisted not only of the city of Florence but the surrounding area of present day Tuscany with the exception of the Republic of Siena and Lucca. It covered a considerable area of central Italy with many vassals that it had conquered. Always wary of its neighbours, especially the ambitions of the Renaissance popes in the Papal States, Florence occupies a precarious position in the grand scheme of the Italian Peninsula.

Stubbornly proud of its Republican heritage, it nonetheless bullied or coerced the lesser states into obedience. Pisa, conquered in 1406, has always been an area of interest for Florence, where Lorenzo the Magnificent built the University of Pisa to buy Pisan loyalty. Volterra, also, has had a great hatred of Florence ever since its sack. Florence was very aware of the potential uprisings and revolts in the smaller cities, usually instigated by an enemy of the Republic. However, during the decade before Alexander VI's reign, a greater danger has been posed by continuous papal expansion in the Romagna. This region's political situation is where Florentine interests often conflict with that of the Pope. This led to the infamous Pazzi Conspiracy in 1478 where a direct assassination of Lorenzo the Magnificent and Giuliano de' Medici was backed by Pope Sixtus IV. 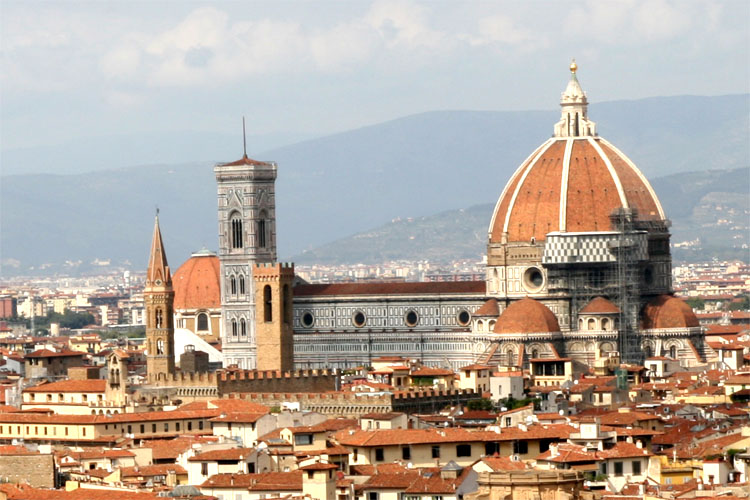 In the 13th century, Florence went through political turmoil where the popolo (the people) rose up against the elite (known as the Ciompi Revolt) and established a Republic. However, as the century wore on, the Popolo were divided between the middle and lower class workers and the artisans of the upper classes. The late 13th century was a time of expansion and building for Florence as population continued to grow, aided by the opulent wool industry that connected England and Italy to the courts of all the monarchs. In the 14th century, the workers rose up against the wealthy and powerful merchants. The wealthy merchants were forced to accept many of the constitutional reforms demanded by the lower middle class.

The 14th century turned out some of the greatest minds of Europe, showing the beginning of the Renaissance. Petrarch began the renewal of antiquity with his letters to Cicero, Boccaccio, writing in the time of the plague described the new hedonistic approach to life and most importantly Dante Alighieri wrote his Divine Comedy. This period between 1380 and 1420 was looked upon as a sort of Golden Age in republican government, where leading families and members of the signoria displayed a high level of just and efficient statesmanship. The long tradition of the republic itself went a long way in establishing the Florentine identity in the early Renaissance. 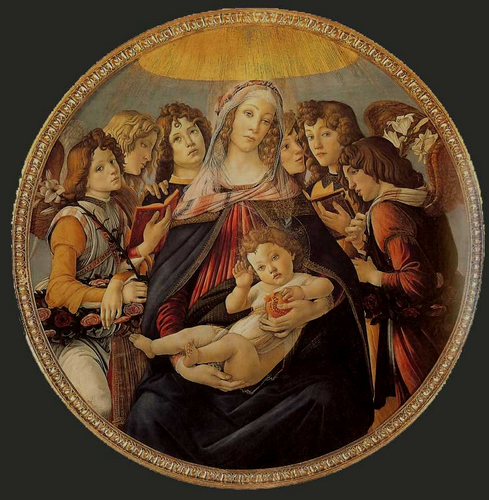 The Italian Renaissance movement in Florence is one of the most extensively documented subjects in history. The success of Florentine School architects such as Ghiberti, Brunelleschi, and Alberti, sculptors Andrea della Robbia, Donatello, and Verrocchio, and painters Giotto di Bondone, Paolo Uccello, and Fra Angelico - among scores of Florentine Masters account for its widespread fame and seemingly preeminent position in the development of Renaissance Art. The fertile ground of republican Florence (the same can be said for Venice at this point as well), along with Vasari's Lives of the Most Excellent Painters, Sculptors, and Architects (1550) contribute to Florence's prestige as the birthplace of the Renaissance.

The extensive patronage, civic improvement projects, church donations by the wealthy, and the establishment of many academies for the study of art and the humanities also spurred the development of Renaissance art in the 15th century. These artists were employed for manifold purposes: to display the refinement of the patron, to establish the authority and enhance the prestige of the group or family that commissioned the work, and to revitalize the dwellings, churches, and public spaces - which were always in various states of repair. The Neapolitan humanist Giovanni Pontano proclaimed in his 1494 publication De Magnificentia that this magnificence was a prerequisite for any lord or prince. To display it was a bit like giving your constituents proof of your ability to protect

and rule. Florentine elites maintained this process of patronage and display for over two hundred years. A happy result of this need for public display is the extant portraiture of many members of the Florentine nobility encased in the faces of saints, madonnas, and angels, as one sees in the purposeful donor panels and frescoes of Domenico Ghirlandaio's Sassetti Chapel.


The Republic and Signoria 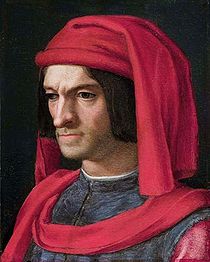 In Renaissance Italy, Florence was a republic with a complex system of government. The foremost citizens in Florence were called the Reggimento and wielded enormous power regardless of the members sitting on the councils. The official government consisted of the rotating nine Signoria (or Priori), which were drawn every two months from a purse filled with the names of eligible men. The foremost of these nine men was the gonfaloniere, which traditionally protected the people from the nobility. There was also the Florentine council of Eight, which acted similarly to the secret police and rooted out any dissenters or treason. The Ten of War was summoned in times of war and was given almost dictatorial powers but oftentimes stayed on at the instigation of the Medicis as a tyrannical body that controlled the city. The Balia was created by the Parlamento in the case of emergencies and had tyrannical power. It was used to for approval of government reforms. The Parlamento sat everyone who was able to participate in government, also called in emergencies. Anyone who sat in a seat of government must be a member of one of the city's 21 guilds. Seven of the Signoria were selected from the seven major guilds while two were selected from the more minor guilds. Membership into a guild was extremely selective and the Minuto Popolo, a mass of unskilled and skilled workers were barred from forming their own guild.

The last years of the rule of Lorenzo the Magnificent were marred by his mismanagement of the Medici Bank, which led to its failure. Upon his death in 1492, he was succeeded by his first son, Piero "the Unfortunate." In 1494, the Medici family were ousted from Florence in response to the political allegiances made by Piero. In its place came the theocratic republic of the Dominican friar, Girolamo Savonarola of Ferrara. Savonarola preached the coming of a scourge from Heaven and onslaughts by foreign armies (the French were mobilizing under Charles VIII). His Apocalyptic style combined with his enigmatic oration and prophesies helped foment a fundamentalist religious revival. As part of his reforms, he orchestrated the infamous Bonfire of the Vanities. After openly defying the pope's orders to cease preaching about how he communicated with God through dreams, Alexander VI (Rodrigo Borgia!) excommunicated the friar and placed Florence under a papal interdict that imposed trade sanctions on the city. Savonarola was tricked into a Trial by Fire, arrested, tried, then hung and burned at the stake as a heretic. (A commemorative bronze plaque is set into the stones in the Piazza della Signoria where he and two of his fellow Dominicans were executed.) The secular republican system was reinstated with the election of Piero Soderini as Gonfaloniere for Life and Niccolo Machiavelli as Second Chancellor. 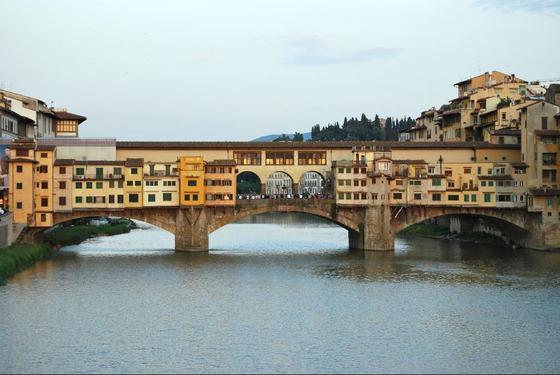 With the return of Giuliano and Lorenzo di Piero de Medici (third son and grandson of Lorenzo the Magnificent, respectively) in 1512, Soderini and Machiavelli were exiled and power reverted back to the Medici. Their rule of Florence, Nemours, and Urbino was facilitated by the shameless removal of the della Roveres (Pope Julius II) from the duchy after the election of Giovanni de' Medici as Pope Leo X. The Medici family continued to dominate Florence, with the exception of a minor revolt during the Sack of Rome. In 1536, the Republican government was destroyed to make Cosimo I the Duke of Tuscany. Cosimo I was preceded by the unsavory Duke Alessandro (illegitimate son of Giulio de Medici) - the last male of the main branch of the Medici. Cosimo was the son of Giovanni dalle Bande Nere and Maria Salviati. Cosimo consolidated his power and position and ruled with a firm hand, suppressing any revolt and eliminating any contest to his increasingly autocratic government. He married the sophisticated Eleonora of Toledo, daughter of the Viceroy of Naples (Don Pedro Alvarez de Toledo). The Medici continued to rule for several generations. Their influence diminished in the 17th century, and the Grand Duchy of Tuscany fell to the Holy Roman Emperor Francis Stephen of Lorraine in 1737. Of paramount importance to art historians was the donation of and stipulation that all of the fabulous Medici art collection remain in Florence as a gift to the city, made by Anna Maria Louisa de Medici in 1737.