The heroes of Italian literature and poetry have an long heritage beginning with compilations and ballads of the ancient Greeks. Early renaissance scholars - Dante Alighieri (1265 -1321) author of Divine Comedy, Francesco Petrarch (1304 - 1374) who coined the term "Dark Ages," and Giovanni Boccaccio (1313 - 1375) who wrote De Mulieribus Claris and The Decameron - form the legacy upon whichRenaissance writers drew their inspiration. The most notable early Italian Renaissance neo-platonist humanist philosphers who contributed to the flowering of classical study were Marsilio Ficino, Angelo Poliziano, and Giovanni Pico della Mirandola. Later Renaissance literary achievements include Matteo Maria Boiardo's Orlando Innamorato, Baldassare Castiglione's The Book of the Courtier, Pietro Bembo's Gli Asolani, and Ludovico Ariosto's Orlando Furioso. The mid-16th century saw the rise of many women writers and poets such as Vittoria Colonna and Veronica Gambara.

The Founding Fathers of Italian Renaissance Literature and Poetry

Unlike Venice and Florence in the last two decades of the fifteenth century, Rome never became a center for the printing of illustrated books. The three most important Roman printers of the period, John Besicken, Andreas Freitag, and Stephen Plannck were German by birth and training, and their publications reflected a Germany style in book production. Also, Roman print culture did not evolve from a fine arts tradition as occurred in Venice and Florence. No leading school of painting contributed its influence to the woodcutters and designers at work in Rome, and as a result, the woodcut there did not take on the fresh characteristics of the Renaissance style until after the turn of the sixteenth century. 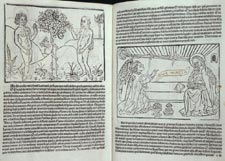 Rome, 1484 Cardinal Juan de Torquemada's Meditations on the life of Christ, a
cornerstone of Italian book illustration, is thought to be the first Italian book illustrated with a series of woodcut images. The first edition was printed in Rome in 1467 by the German printer Ulrich Han. The copy displayed here is the fourth edition, printed Stephan Plannck, Han's apprentice who took over the business after his death. The designs of the thirty-three woodcuts, though considered rough by some early critics, are distinguished by their spaciousness, clarity, and economy of line, all important characteristics of the Italian woodcut before 1490. These woodcuts of "Adam and Eve in the Garden" and "The Annunciation" are simply constructed, gracefully executed, and eminently accessible to the viewer. A sensuousness in the lines that define Adam's torso and the fine turn of Eve's ankle suggests a developed sense of artistic possibility. This emphasis on the physical form demonstrates a new artistic awareness that was developing in Italian woodcut design during the early Renaissance.

Venice, 1491 This 1491 edition of Dante Alighieri's Divine Comedy is considered by many bibliographers to be one of the most important illustrated editions of Dante's masterpiece printed in the fifteenth century. It contains three full-page woodcuts introducing each of the books of Dante's poem and ninety-seven small cuts illustrating the action of each canto. Framed by a monumental architectural border, this large woodcut illustrating the beginning of Book 3, Il Paradiso, translates into pictorial form Dante's beloved Beatrice's vision, transmigration, and ecstacy as she ascends from earth to paradise. The image exemplifies the "popular" style of Venetian woodcut, which gets its name from the designer's decision to dress its characters in contemporary costume, to use playful images to decorate borders, and to populate the composition with animals, birds, and flowers. The designer achieves this effect by the delicate use of outline to construct forms rather than relying on shading or parallel lines. This technique keeps the image open, less formal, and emphasizes the popular nature of the design. 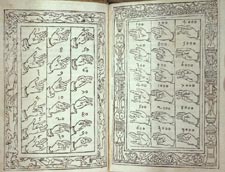 Florence, 1491-92 Calandri's Arithmetica is the first Italian arithmetic book to
contain illustrations that illuminate mathematical problems, as well as being the first work to discuss long division. The woodcuts contain many of the characteristics of Florentine designs from this period, including the use of ornamental borders to frame an image, simple contours to elucidate content, and sensitive physical representations that depict human expression. In this illustration, the borders of the woodcut are characterized by a freedom of line and playful imagery. Composed of four individual blocks all of different design, the borders are cut in a delicate yet casual style, incorporating standard motifs of columns, urns, foliage, branch-and-leaf patterns, cherubs, and birds. The hands counting numbers are cleverly designed and sensitively convey motion. They depict a physical reality typical of woodcuts produced in early Renaissance Florence. The remainder of the woodcuts in this volume illustrate mathematical problems, including examples of use to builders, merchants, and farmers. 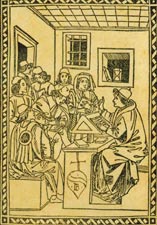 Florence, 1492 The subject of this woodcut, "The Master and His Seven Students," was a common motif used in Italy to illustrate educational or scientific books, much the way portraits of saints were used for religious tracts. This image introducing Landino's manual for secretarial writing is considered one of the finest woodcuts produced in fifteenth-century Florence. The artist's consummate skill at drawing and composition are perfectly matched by a woodcutter capable of creating fine line cuts that translate expression and motion in a natural and convincing manner. The ordinary nature of this composition is heightened by the emphasis on the individual characteristics of each of the figures. The thin ribbon-patterned border is a common element of Florentine woodcuts. In A Catalogue of the Books in the Library of C. W. Dyson Perrins (1914), Alfred Pollard called this woodcut a "little masterpiece of quiet drama."