Many of the greatest artists of all time can be found in Quattrocento (1400s) and Cinquecento (1500s) Italy. Explore the lives and works of Italy's renowned artists, including the High Renaissance Trinity: Leonardo, Michelangelo, and Raphael.

Italy during the Renaissance gave birth to some of the world's best artists, the Italian Masters. Their work remains at the apex of artistic achievement, with advances in linear perspective, use of color and shadow, new styles and technique, perfection of harmonious balance - a rebirth of artistic creation with man at the center of all things. 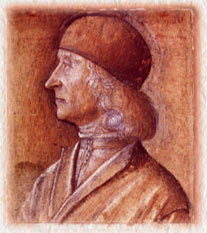 
The first painting which Alfonso acquired for his studiolo was the Feast of the Gods, completed by Bellini in 1514. Bellini died in 1516. Later, after other commissions from Raphael and Fra Bartolomeo had failed to materialize because the painters had died, Alfonso turned to Titian to complete the project during the period 1518-1529, according to the design created by Mario Equicola in 1511. Titian contributed three of the five paintings needed to fill the studiolo and the fifth was painted by Ferrara's court painter, Dosso Dossi. As will be seen, Bellini's painting, the Feast of the Gods, was to be altered twice during that period—once by Dosso to modernize the design and later by Titian to harmonize the Dosso re-working with the other Titian paintings in the studiolo.

Giovanni Bellini was recognized as the greatest Venetian painter of the fifteenth century. Fifty years later, Titian, who had been Bellini's student, was acclaimed as "the father of modern painting." 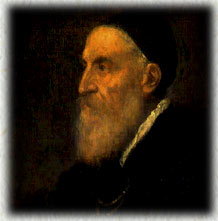 The Feast of the Gods is unique because it combines on a single canvas painting by the greatest Venetian painters of the fifteenth and sixteenth centuries. Each complements the other and each contributes to the whole. Bellini's array of deities, set as a classical frieze, is painted with striking patches of color, brilliantly accentuated with dazzling contrasts of light and shade. As a background, Titian creates a breathtaking landscape, again using color, as in his Danaë, not to highlight but to unify and intensify the total effect.

The Feast of the Gods was a product of the Italian Renaissance, a time of unprecedented creativity and discovery throughout Europe. Voyages to new and distant lands brought trade and unimagined wealth. In the east, the sacking of Constantinople by the Turks in 1453 brought scholars, and their ancient texts, to Europe, inspiring a re-discovery of the classical past of Greece and Rome. It was a time of new knowledge-astronomers, for example, showed that the planets revolved not about the earth but about the sun—and the invention of printing disseminated the new knowledge. Such changes affected man's thinking—about himself, his past, his world, and his place in the world. This period (c. 1300-1600) which marks the transition between medieval and modern times, is identified as "The Renaissance."

By the year 1500, Venice had developed its own artistic style which differed from that of Florence and Rome. There was intense rivalry between these two styles, expressed in the so-called disegno vs. colorito debate—which asked whether draughtmanship or the use of color was of greater importance in painting. Titian, as the greatest colorist ever, epitomized the Venetian command of color, using in his Danaë, not many different colors but color as a single element, unifying the painting and binding it together. Vasari, in his Lives of the Artists, relates how Titian met his rival from Florence, Michelangelo, when Titian delivered his Danaë to its new owner in Rome. Michelangelo praised the painting's colorito but criticized its designo (the faulty left leg). Various reasons are given for the Venetians' command of color. As the greatest maritime power in Europe, at the center of trade between north and south and east and west, Venice was the port-of-entry for all exotic pigments and dyes and Venetian artists used these extravagantly. Oil paints allowed more subtle coloring effects and were adopted early by Venetian artists, probably because tempera and fresco were unstable in the humid sea air of Venice. Finally, Venice is uniquely situated in a lagoon. Light over water—falling from every direction in a lagoon—produces dramatic optical effects and these may well have heightened the sensitivity of Venetian artists to color.
Joseph and Potiphar's Wife 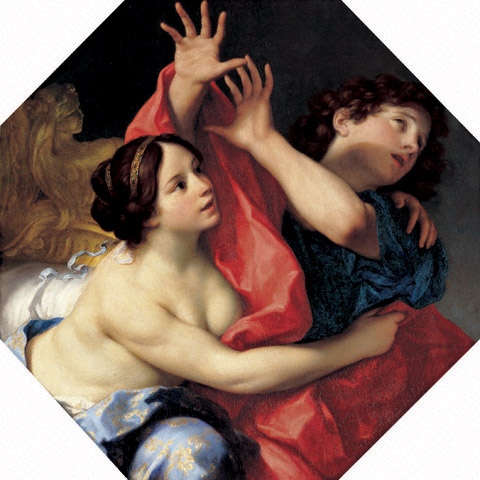 Galatea in Her Shell Wagon 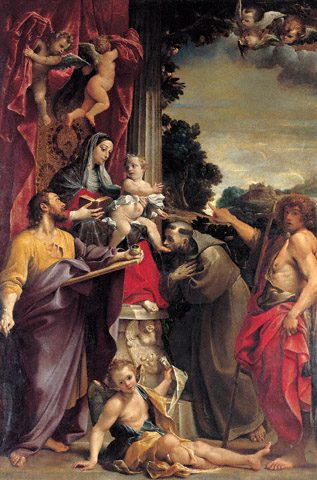 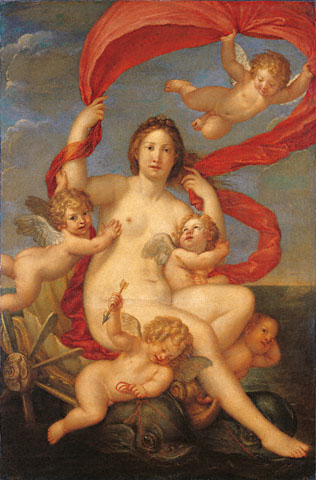 Albani emphasized Galatea as a symbol of ideal beauty, framed by her windblown red drapery. She is poised for a ride across the waters on a paddle-wheeled, porpoise-powered shell. A putto, arrow in one hand, red reins in the other, drives the inventive vehicle forward.

Albani's interest in depicting nude female mythological figures continued throughout his long life. Just a year before his death, he wrote that he took "great delight in the divine and earthly deities, in nymphs, putti, and graceful acts."
The Carracci Family
Four hundred years ago the Carracci family of painters was as famous as Raphael or Caravaggio. This band of creative rebels from Bologna consisted of two brothers, Annibale and Agostino, and their slightly older cousin Ludovico. They challenged the artistic establishment of their day and revolutionized the art of painting. The academy they established in their workshop in Bologna in 1582 exercised an enormous influence on subsequent painters. It attracted the most talented artists of the next generation, including Guido Reni, Domenichino, and Francesco Albani (all represented in this exhibition). The Carracci and their students set about remaking their art through the observation and mastery of nature. They drew tirelessly from the live model to improve their skill in representing the human body, both in the studio and on the streets of Bologna, where they observed everyday life. The other foundation of the Carracci reform was intensive study and analysis of successful works by the great Renaissance painters, especially Raphael. 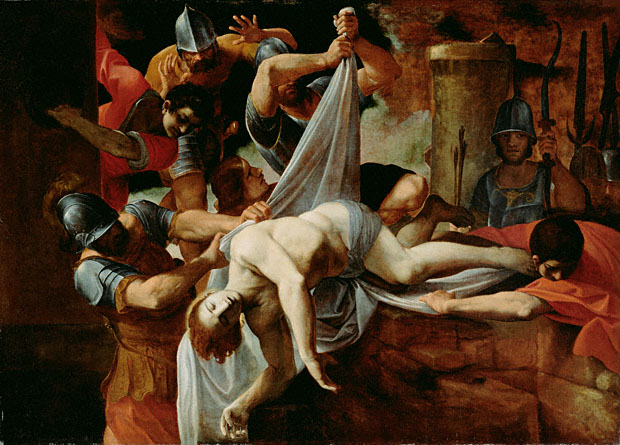 Maffeo Barberini, who later became Pope Urban VIII, commissioned this rare depiction of an episode from Saint Sebastian's martyrdom, which followed his attempted execution with arrows. It was intended to decorate the chapel in the new Roman church of Sant'Andrea della Valle constructed above the site of Sebastian's disposal in the Cloaca Maxima (the ancient Roman sewer).

The persuasive naturalism of Ludovico's rendering of the dead youth and of the brutal force of the Roman soldiers paired with the somber, nocturnal colors made Barberini reconsider placing the painting in a chapel. Deemed unsuitable for contemplative prayers, the picture entered the Barberini family's private collection.