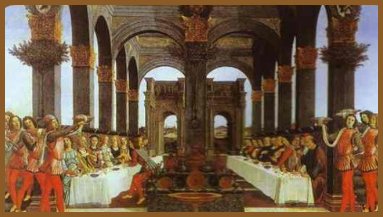 Banquet Food - One of the most striking features of banquet food was the presence of sugar, for both visual and symbolic effect, the lavish use of this expensive ingredient underlining the host's magnificence. The banquet menus appended to the printed edition of the Viandier of Taillevent (c. 1315–1395) in the last decade of the fifteenth century suggest an extravagant and incongruous application of sugar to roast quail, chicken and pigeon. (Originally compiled in the fourteenth century and attributed to the royal chef Taillevent, Le Viandier represents one of the few records of the cuisine of medieval northern France.

The late-fifteenth-century printed edition contains additional material not included in the early manuscripts.) The chapter titled "Banqueting and made dishes with other conceits and secrets" in Gervase Markham's The English Hus-wife (1615) is composed of recipes for essentially sweet dishes such as fruit tarts, marmalades, preserves, marzipan, and jelly. Sugar was used in dishes such as jellies, blancmange, and quince paste, and on dishes such as fritters and pies (Italian torte). It was an essential ingredient in the candied nuts and spices offered at the end of the meal, in jewel-like glazed fruits often hung on miniature trees of silver, and in decorative marzipan figures and in sculpted sugar table ornaments. For a banquet given by don Ercole, son of the duke of Ferrera, to a group of nobles including his father, Messisbugo ordered a sugar model of Hercules and the lion, colored and gilded, to decorate the table; with the final course of confetti came more sugar models representing Hercules defeating the bull, together with Venus, Cupid, Eve, and other mythical figures.Because the banquet was itself an exceptional meal, banquet food had to be out of the ordinary (out-of-season asparagus, gilded and silvered calves' heads).

This typically translated as the most prestigious, most expensive ingredients—meats such as veal and capons—prepared in the most elaborate, spicy ways so as to emphasize the art and skill of the cooks (which, in turn, reflected glory back on the reputation of the family). It also meant many services, each usually composed of several dishes, although it was not expected that everyone would eat something from every service—dishes were to be admired as much as consumed. The banquet offered by Gaston IV, count of Foix, in honor of the ambassadors of Hungary in 1458 was comprised of seven services punctuated by four entremets; some of Messisbugo's menus ran to ten services, each composed of six or more dishes.Especially when elements of performance were included, banquets could last many hours, and often led into a ball. At don Ercole's dinner, after all the courses and all the performances, the guests danced until daybreak, "fino al giorno chiaro" (until the light of day).