Mantua is a northern Italian city in the region of Lombardy between Milan and Ferrara. It is surrounded by three man-made lakes (Superiore, Mezzo, and Inferiore), which are fed by the River Mincio. The city itself is the capital of the province of Mantua. The city boasts many Renaissance buildings and museums - remnants of the bygone age which put this little city on the map. It is a UNESCO World Heritage Site. The city is also notable as the birthplace of the revered classical poet, Virgil (70 BC - 19 BC), author of The Aeneid. The history of Mantua owes much of its fame to the cultured court of the Gonzaga family, rulers in fief for the Holy Roman Empire's loosely-controlled Kingdom of Italy since the 1300s.

The earliest civilization to live at Mantua were the Etruscans, a proto-Roman culture which populated much of northern and central Italy almost three thousand years ago (by 750 B.C.). The city's name comes from the Etruscan god of Hades, called Mantus. The city thrived independently as an outpost of later expansion of the core Etruscan region until the Punic Wars of 264 BC - 146 BC, when it was conquered by the Romans under Augustus.

Following the fall of the Roman Empire, Mantua was conquered by Byzantines, Longobards and Franks, respectively. In the 11th century it became a possession of Boniface of Canossa, the Marquis of Tuscany. The last ruler of the family was the countess Matilda of Tuscany. After the death of the Countess Matilda, Mantua became a free commune, and defended itself from the Holy Roman Empire until the Guelph and Ghibelline conflicts of the late 13th and early 14th century. Notable buildings of the era include the Piazza Sordello, which was the political and cultural center of the city beginning from about 1100. The piazza is ringed by medieval palaces created by the Bonacolsi in 1300 one of which was built by Pinamonte Bonacolsi, the Captain of the people who ruled the city from 1273. 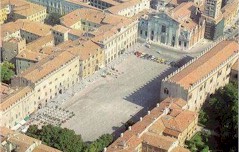 Bonacolsi ruled the city until the internal revolt backed by the powerful Gonzaga family. The Gonzaga were originally imperial officials, called podestas, and in 1318 the first Gonzaga to take control of the government was Ludovico Gonzaga. Ludovico was elected "People's Captain." The title enabled the ruler to oversee the functioning of the civil government and take leadership in defending the city and its possessions. Under the new Vicar-Generals, the Gonzaga, the city's defensive walls and gates were rebuilt, as well as other civic architecture. The ruling family became embroiled in internal conspiracy, resulting in the elimination of all rivals of Ludovico. From then on, the princely Gonzaga made their imprint on Mantua and the Renaissance by virtue of their critical patronage of early Renaissance artists such as Pisanello. The Castello of San Giorgio was built during the rule of the first Marquis, Gianfrancesco I (1407-1444) and 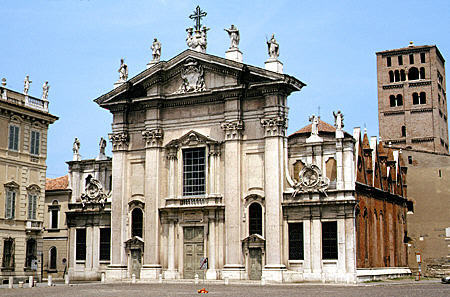 his distinguished wife Paola Malatesta. The Piazza Sordello (above left) is dominated by the gothic cathedral of San Pietro (at right).

Under Gianfrancesco's son Ludovico II Gonzaga, Mantua achieved a high level of cultural achievement, as well as hosted the important (but ineffectual) Council of Mantua (1459). This council of European leaders was called by Pope Pius II to garner support for a war against the Ottoman Empire, who had conquered Constantinople in 1453. The council was concluded with a call for a crusade which never left the ground. It was here that young Cardinal of Valencia, Rodrigo Borgia was known to have participated in lavish parties attended by the noblewomen of Mantua. 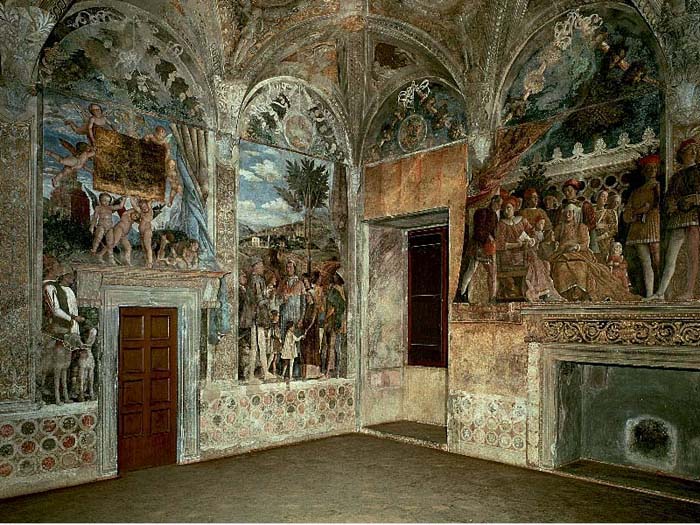 By 1470 Andrea Mantegna was appointed court artist by Ludovico II Gonzaga. Mantegna's position included the planning of festivals, costume and set design for pageants, and the preparation of models for sculpture, but primarily he was occupied with painting. Mantegna's most successful enterprise in Mantua, where he maintained his residence for half a century, was the Camera degli Sposi (bridal chamber) known as the camera picta (the painted room) in the north tower of the Castello San Giorgio. The walls contain contemporary representations of the Gonzaga family, featuring Ludovico II seen below conversing with an official. 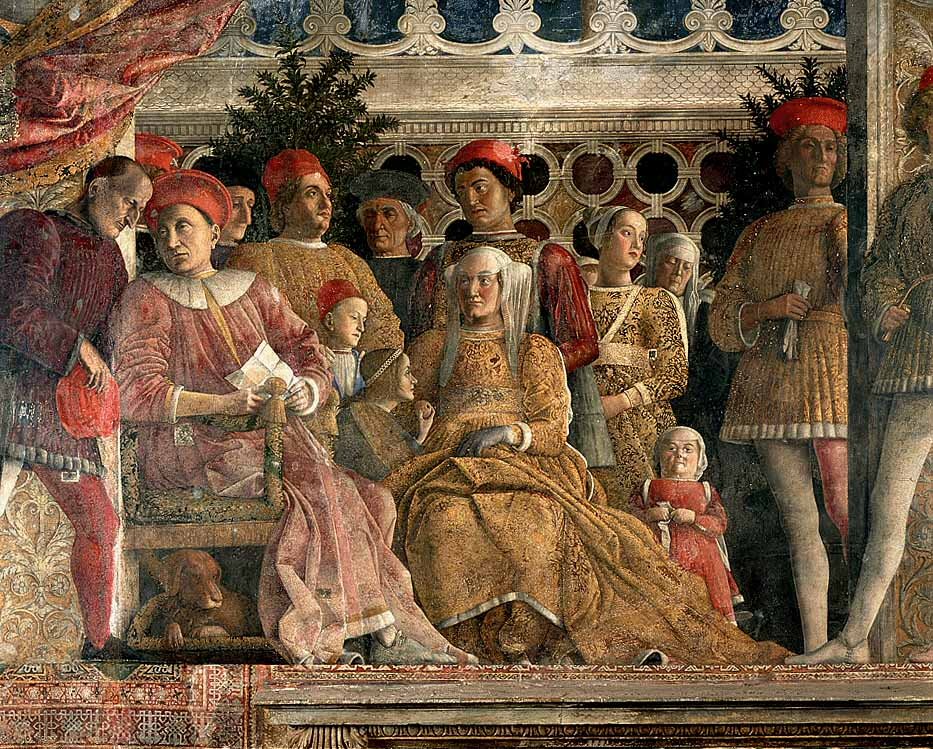 Federico I Gonzaga ruled from 1478-1484. He was noted for his affection for his children and kindness towards the court painter, Mantegna, who more than any artist seemed to be a part of the family. In a letter to Bona, Duchess of Savoy, he wrote "these excellent masters are often somewhat fantastic in humour, and that we must be content to take what they choose to give us [is inevitable]" (Ady, p. 40 from Archivo Gonzaga, lib. xcix.). According to Isabella d'Este's biographer Julia Cartwright Ady, Federico's rule was noted for its elegance, and his relations with other princes of Italy were good. His children made fine marriages, and were raised in the humanist tradition. Pictured right is Ludovico II, Barbara of Brandenburg, and their children. The man behind Barbara is Federico I.

Federico I's eldest son and heir Francesco was to make his mark on history not only for his exploits as a condottiero, but also for his two very famous Renaissance Women, his wife Isabella d'Este and his intimate correspondent and likely lover, Lucrezia Borgia.


The Court of Isabella d'Este and Francesco Gonzaga

Francesco II Gonzaga was the eldest son of Federico I Gonzaga, Marquis of Mantua and Margaret of Bavaria. He was born in 1466. His siblings were Sigismund (Bishop and Cardinal of Mantua), Chiara (who married the Duke of Montpensier, and was mother of Charles de Bourbon), Elisabetta Gonzaga, (who married Guidobaldo, Duke of Urbino) and Maddalena (who married Giovanni Sforza of Pesaro, Lucrezia's first husband). Francesco was an accomplished condottiero and Commander of the Venetian Army between 1489-1498. He was commander-in-chief of the Italian League's armies that attempted to route the French at the Battle of Fornovo in 1495. The marriage of Francesco Gonzaga and Isabella d'Este was arranged when both were young, to cement an alliance between the Este of Ferrara and the Gonzaga of Mantua. Isabella was then the cherished eldest daughter of Duke Ercole I d'Este and the beloved Duchess Leonora d'Aragona (daughter of King Ferrante of Naples). The match was an illustrious one for the Gonzaga, and it brought a large dowry and the prestige of Italy's longest ruling princely dynasty in conjunction with Italy's only royalty, the Aragonese kings of Naples. 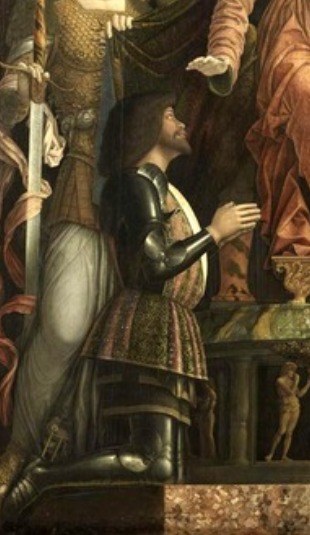 The late 15th century, during the reign of the Borgia pope, was a period of great cultural flowering at Mantua. Though very small and not particularly wealthy, the city managed to stay independent during the tumultuous years of Cesare's conquests to the south. The city remained on mutually beneficial terms with Ferrara, Milan, and Venice - all while staying friendly with the pope. In her letters, many of which are reprinted in full in Ady's two-volume biography, we see Isabella sheltering the exiled dukes of Urbino while simultaneously sending gifts to their bitter enemy, Cesare Borgia.

Under the auspices of the Gonzaga, Mantua became renown as a center for the arts. In the musical sphere, the earliest recorded lute music was composed in Mantua, by Francesco Spinacino under the Gonzaga. Other musicians at court were Bartolomeo Tromboncino (c. 1470 - c. 1535) and Marchetto Cara. Tromboncino was a member of Isabella d'Este's personal retinue at the Mantuan court, serving as her personal composer, tutor, and accompanist. Renaissance masters, the painters Mantegna and Perugino were highly patronized at court, and the civic improvements made under the Gonzaga are on par with all of the major Renaissance centers of culture. According to UNESCO, "Mantua and Sabbioneta are exceptional witnesses to the interchange of human values of the Renaissance culture. They illustrate the two main forms of Renaissance town planning: the newly founded town [Sabbioneta], based on the concept of ideal city planning, and the transformed existing town [Mantua]. Their importance relates also to architecture, technology and monumental art. The properties have played a prominent role in the diffusion of the Renaissance culture in and outside Europe." Cited here: http://whc.unesco.org/en/list/1287

At right: Madonna of the Victory, (detail) by Andrea Mantegna (1496) featuring the Marquis Francesco Gonzaga.

The Apogee of Prestige

Under Federico II (godson of Cesare Borgia and favorite ofPope Julius II - respectively), Mantua reached its apogee of prestige, wealth, and importance. Federico II, acquired the title of duke from Charles V, Holy Roman Emperor in 1530. The following year, the family acquired the Marquisate of Montferrat through Federico’s marriage with imperial heiress Margherita Palaeologo. Federico commissioned Giulio Romano to build the famous Palazzo Te, in the periphery of the city, which is an outstanding example of Mannerist architecture. Mantua contains many artworks and architectural treasures that record its important place in Italian history. In 1708, Mantua was taken by the Habsburgs, forever ending Gonzaga rule. Afterwards the city passed under Napoleon's domain, and was later unified with other regions into modern Italy.