The Turkish Ottoman Empire and the Papacy of Alexander VI 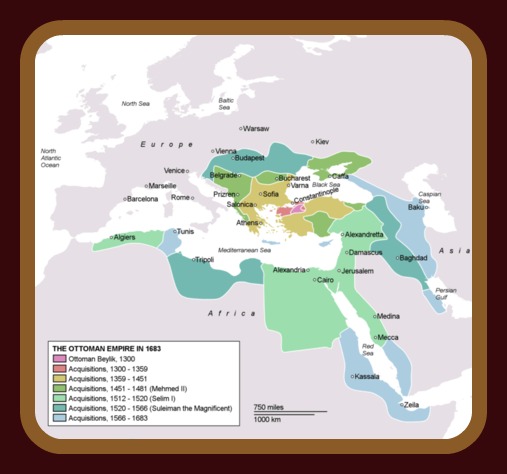 The Ottoman Empire in the time of Alexander VI consisted of those lands shown in pink, red, khaki and green on the above map. Those shown in pale green, blue and pale blue were conquered later (e.g. Egypt and modern-day Syria and Israel remained a separate power under the Marmeluke sultans until 1517).

Mehmet II became Sultan of the Ottoman Empire in 1451, at the age of nineteen. He was anxious to prove himself a worthy successor to his father Murat and to continue Ottoman expansion.

Mehmet decided that the best way to win a reputation was to conquer the last remnant of the old Byzantine, or Eastern, empire - the city of Constantinople. He began by building forts along the Dardenelles. He commisoned a famous Hungarian engineer, Urban, to build him a giant bombard, or cannon. On 5th April 1453, the siege began. Despite the urgings of Pope Nicholas V, Christian nations had been slow to come to Constantinople's defence, but some individuals did respond, including a famous soldier from Genoa, Giovanni Guistiniani. Mehmet quickly realised that the weakest point of the walls was at the Lycus valley, and concentrated his artillery on this point. He succeeded in breaching the walls. The defenders managed to make hasty repairs on two occasions, but at the costs of heavy loss of life. By 28th May, it was clear that Constantinople was doomed unless foreign help arrived. It never did. The last Emperor, Constantine, was killed in the fighting, as was Guistiniani, and on 29th May, Mehmet entered the city. The Ottoman soldiers sacked the city, killing many of the inhabitants. 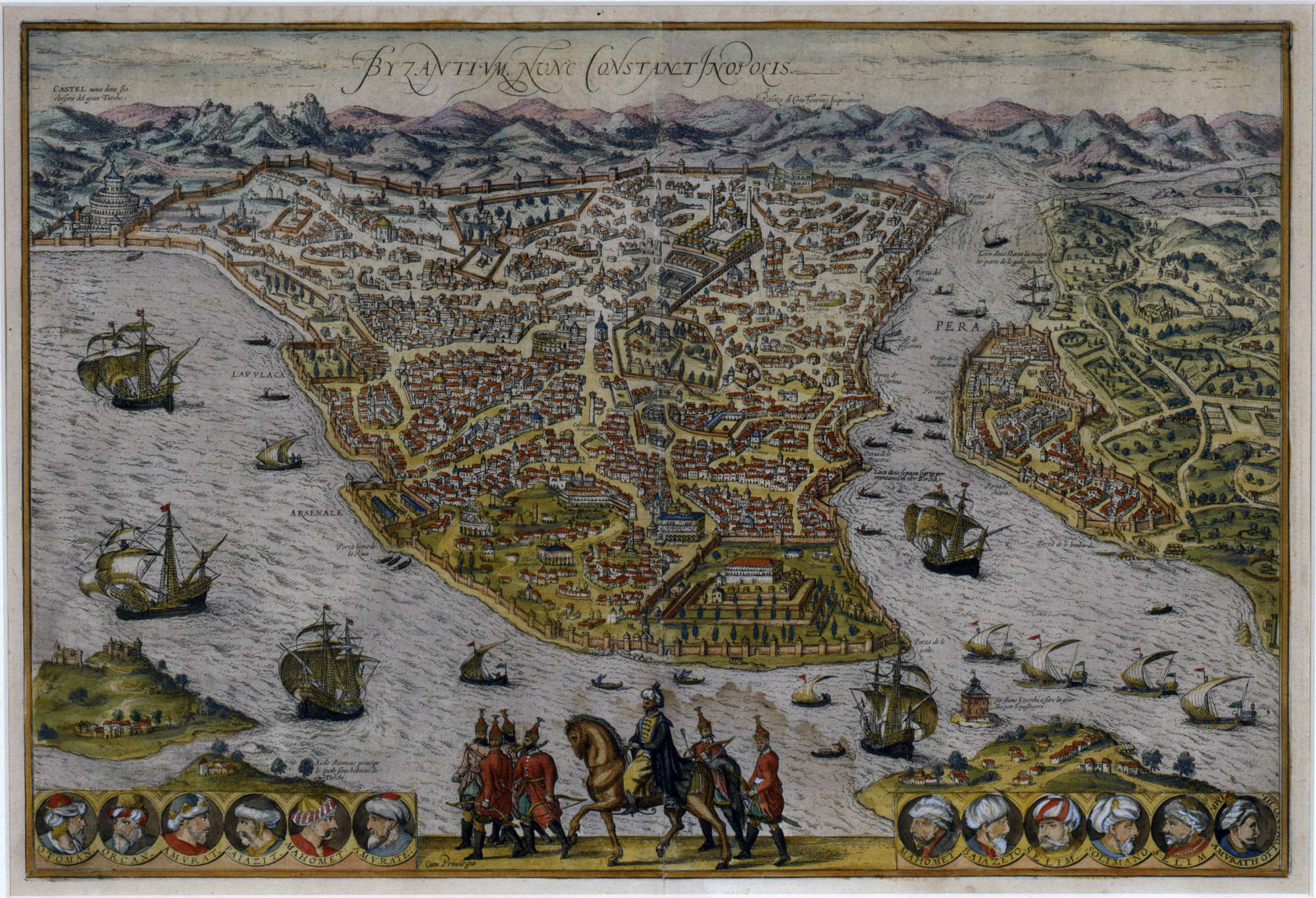 Mehmet restored Constantinople and made it his capital. Its fall caused shockwaves throughout Christendom and Pope Nicholas urged a counterattack, but died before he could make any headway. The next Pope, Callixtus III (Alfonso Borgia) was no more successful, as the Christian princes were too busy fighting with each other and the Italian cities too fearful of damaging their trade. The fall of the Byzantine empire was to be counterbalanced by the Spanish conquest of the Muslim kingdom of Granada, last Islamic outpost in Westerm Europe, thirty years later.(Click here for a large version of the historic map)
The fall of Constaninople is considered by some historians to mark the end of the Middle Ages. Renamed Istanbul, the city is the largest in Turkey and remains predominantly Muslim to this day.

After this spectacular success, Mehmet's attention was focused primarily on expansion into the Balkans. The conquered Christian populations were usually treated quite well, but they had to provide one fifth of all boys to be slaves to the Empire as soon as they reached the age of thirteen. The slaves formed the backbone of the Turkish army - the Janissaries - and the civil service.

Although Mehmet took over some Venetian territories in Greece, the next major Turkish threat to Italy and the western kingdoms came in 1480. A Turkish fleet and army besieged Rhodes, held by the knights of St. John, and another, under Gudik Pasha, attacked the Italian city of Otranto in the Kingdom of Naples. The siege commenced on 28th July 1480. The city put up stiff resistance, but the citizens were eventually forced to retreat to the castle, which was taken by the Turks on 11th August. It was alleged that the elderly Archbishop was sawn in half and that 800 men who refused to become Moslem were publicly beheaded. Reports of atrocities may have been exaggerated, but it appears that large numbers of the population were killed and many others sold into slavery.

The Christian counter-offensive began the following year. Alfonso, Prince of Calabria, eldest son of the King of Naples, led an amy which was reinforced by troops from Spain and Hungary.. They suceeded in driving off the Turks by the end of May 1481, although the news of the death of Sultan Mehmet may well have disheartened the Turkish army.

Mehmet had proved himself an outstanding leader - forceful, intelligent, and determined. He was also cruel and ruthless - he passed a law allowing any Sultan to murder his surviving brothers in case they posed a risk to the throne. However, it was not exactly unheard of for Christian rulers of the time to behave in a similar manner - Edward IV of England and James III of Scotland both secretly executed younger brothers, and Eleanor of Aragon poisoned her elder sister to obtain Navarre. 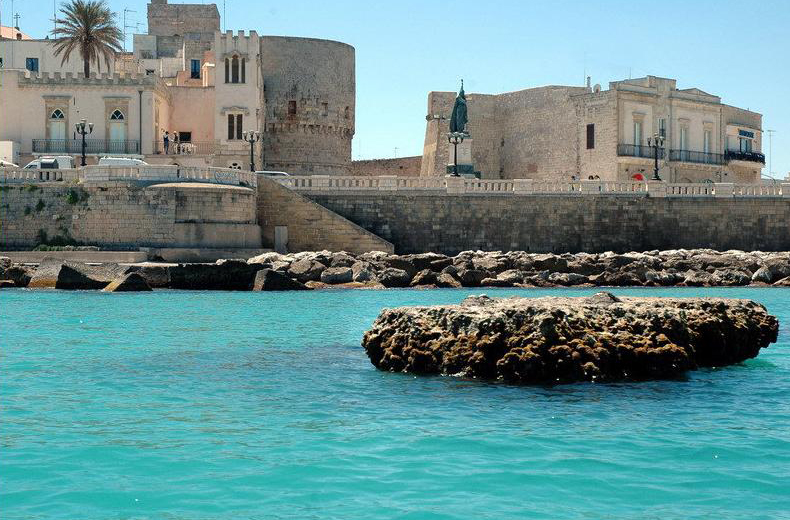 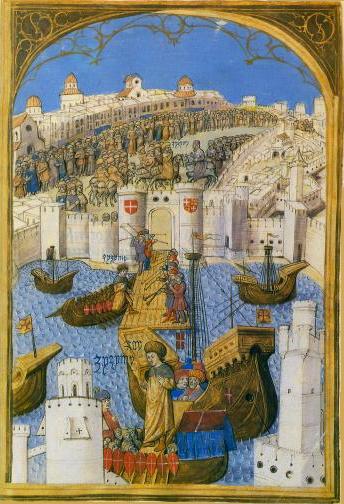 Following the death of Mehmet, his son Bazajet, or Bayezid, became Sultan. His policies were generally more peaceful than those of his father, and he made treaties with a number of European powers, including the Holy Roman Empire. The main exception was his conquest of the fortresses held by the Venetians in mainland Greece between 1500 and 1501. However, at the request of Pope Alexander, Spanish forces under Gonsalvo de Cordoba helped the Venetians retake the island of Cephalonia in 1500.

Bayezid II also sent out the Ottoman navy under the command of Kemal Reis to Spain in 1492 in order to save the Arabs and Sephardic Jews who were expelled by the Spanish Inquisition. He sent out proclamations throughout the empire that the refugees were to be welcomed. He granted the refugees the permission to settle in the Ottoman Empire and become Ottoman citizens. He ridiculed the conduct of Ferdinand II of Aragon and Isabella I of Castile in expelling a class of people so useful to their subjects. "You venture to call Ferdinand a wise ruler," he said to his courtiers — "he who has impoverished his own country and enriched mine!" *

Prince Cem, brother and rival of the Ottoman Sultan, arrives in Rhodes 1482 (at right)

Alexander's main contact with the Ottoman empire was through Prince Cem, or Djem, younger brother of Bayezid. Given the Turkish acceptance of fratricide, Cem wisely fled when his brother became Sultan, taking shelter with the Knights of Rhodes before becoming a hostage at the Papal Court in 1479. Cem was an accomplished poet who enjoyed a luxurious lifestyle, and he became a friend of both Juan and Cesare Borgia. Juan in particular often copied Cem by wearing elaborate clothes in the Turkish style, which scandalised many Romans. Alexander received an annual sum of 40,000 ducats from the Sultan in return for keeping his brother out of Turkey. When Charles VIII of France invaded Italy in 1494, Alexander was reluctantly forced to hand Cem over to the king. Cem died as a French hostage in Capua in 1495.

In the early years of his papacy, Alexander displayed some interest in a crusade against the Ottoman Empire. In 1493, he endorsed a multi-national plan which involved simultaneous descents through Poland, Hungary, Germany, Croatia and Greece, with a naval expedition launched from Italy by himself and Spain. This plan was effectively scuppered by Charles of France invading Italy. Although Alexander and other European rulers continued to speak of a crusade, nothing was done as they were all too busy fighting amongst themselves. ' Defence of Christendom against the Turk' was frequently used as an excuse for princes to raise armies in order to launch attacks on their fellow Christians: on hearing that Spain and the Holy Roman Empire had formed such an alliance, Louis XII of France said "I am the Turk that they are arming themselves against". Discovering that a prince was negotiating with the Ottomans was used as an pretext to take over that ruler's lands (the overthrow of King Frederick of Naples by Spain and France was a prime example).