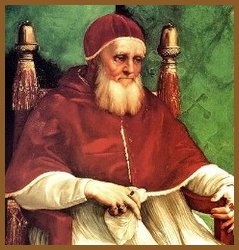 The time of his papal rule coincided with the period of artistic development known as the High Renaissance. A contemporary of Giuliano della Rovere, artist and author Giorgio Vasari, coined this term, and it is still used today. Artists such as Michelangelo, Raphael and Bramante (below right, Pope Julius II Ordering Bramante, Michelangelo and Raphael to Construct the Vatican and St Peter's), were at the height of their careers during this time, and all contributed to projects in the Vatican under Julius II’s patronage. While Julius II may best be remembered as the “Warrior Pope”, or for his Machiavellian tactics, he was also given the name of "the Renaissance Pope." He modeled his patronage practices on those of his uncle Pope Sixtus IV (1471-84), and began amassing large personal and public art collections and commissioning the building of numerous civic and religious buildings when he served as a cardinal and Cardinal Archbishop under Pope Nicholas V and Pope Nicholas VIII respectively. His additions to the art collection of the Vatican may be Julius II's most impressive venture. He commissioned such projects as the painting of the Sistine Chapel’s ceiling, the reconstruction of St Peter's Basilica, and the frescoes of the Stanza della Segnatura and Stanza d'Eliodoro, known as the Raphael Rooms including the School of Athens. 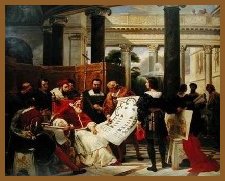 His reasons for commissioning these, as well as other art works were varied. They served political, spiritual and aesthetic purposes. Also, during his papacy, the lead up to the Protestant Reformation produced increased tension in Christianity which caused the Catholic Church to lose influence and political power in Europe. Several of his predecessors were poor, unjust, and impious rulers who caused people to doubt the papal seat and the Vatican’s monopoly on religion. For these reasons, among others, Julius requested the magnificent and powerful images that are still so recognizable today. Julius II died 21 February 1513; several of his commissions were still underway or unfinished by the time of his death. 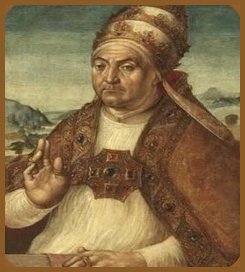 As a civic patron in Rome, even the anti-papal chronicler Stefano Infessura agreed that Sixtus IV should be admired. The dedicatory inscription in the fresco by Melozzo da Forli in the Vatican Palace records: "You gave your city temples, streets, squares, fortifications, bridges and restored the Acqua Vergine as far as the ....." In addition to restoring the aqueduct that provided Rome an alternative to the river water that had made the city famously unhealthy, he restored or rebuilt over 30 of Rome's dilapidated churches, among them San Vitale (1475) and Santa Maria del Popolo, and added seven new ones. The Sistine Chapel was sponsored by Sixtus IV, as was the Porto Sisto, the Sistine Bridge – the first new bridge across the Tiber since antiquity – and the building of Via Sistina (later named Borgo Sant'Angelo), a road leading from Castel Sant'Angelo to Saint Peter's. All this was done to facilitate the integration of the Vatican Hill and Borgo with the heart of old Rome. This was part of a broader scheme of urbanisation carried out under Sixtus IV, who swept the long-established markets from the Campidoglio in 1477 and decreed in a bull of 1480 the widening of streets and the first post-Roman paving, the removal of porticoes and other post-classical impediments to free public passage. 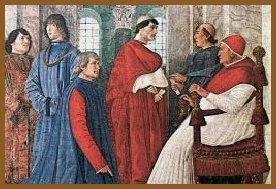 At the beginning of his papacy in 1471, Sixtus IV donated several historically important Roman sculptures that founded a papal collection of art that would eventually develop into the collections of the Capitoline Museum. He also refounded, enriched and enlarged the Vatican Library (see picture right). He had Regiomontanus attempt the first sanctioned reorganization of the Julian Calendar and increased the size and prestige of the papal chapel choir, bringing singers and some prominent composers (Gaspar van Weerbeke, Marbrianus de Orto, and Bertrandus Vaqueras) to Rome from the North.

In addition to being a patron of the arts, Sixtus IV was a patron of the sciences. Before becoming Pope, spent time at the then very liberal and cosmopolitan University of Padua, which maintained considerable independence from the Church and had a very international character. As pope, he issued a papal bull allowing local bishops to give the bodies of executed criminals and unidentified corpses to physicians and artists for dissection. It was this access to corpses which allowed the anatomist Vesalius along with Titan's pupil Jan Van Calcar to complete the revolutionary medical/anatomical text De humani corporis fabrica. 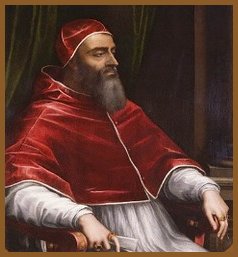 A true Medici, (birth name Giulio di Giuliano de' Medici), Clement VII was a patron of men of letters, including the historian Francesco Guicciardini and the political theorist Niccolo Machiavelli, and of artists such as Benevenuto Cellini, Raphael and Michelangelo. From the last he commissioned the monuments to members of his family in the Sagrestia Nuova of San Lorenzo, Florence, and just before his death 'The Last Judgement' (see below) in the Sistine Chapel. Towards the end of his life Clement VII once more gave indications of a leaning towards a French alliance, which was averted by his death on 25 September 1534 in Rome after consuming the "Death Cap" mushroom. He was buried in Santa Maria sopra Minerva. 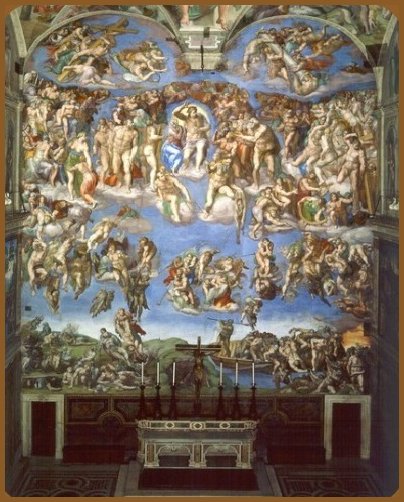