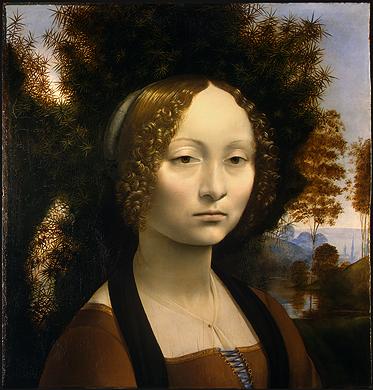 
This painting is the earliest known authenticated portrait by Leonardo da Vinci. The mastery of oil technique exhibited by the 20-year-old is evident. Her formal pose, as well as the symbolic references displayed in the painting, are personal attributes; they also represent the quattrocento ideal of womanhood.

In a visual culture such as ours, it is hard to imagine a world nearly devoid of images of living people. But that was the case in Europe before the fifteenth century when artists devoted themselves almost exclusively to representing saints, biblical figures, and religious scenes. Secular portraiture was limited mainly to likenesses of rulers or images of donors tucked into the corners of altarpieces and other paintings of sacred themes. In fifteenth-century Florence, portraiture expanded to encompass members of the merchant class, who appear in scores of panel paintings, on medals, and as marble busts. Almost from the outset, this development included women as well as men. Virtue and Beauty focuses on the flowering of female portraiture in Florence from c. 1440 to c. 1540; it also presents several male portraits, Northern European or courtly analogues, and works that relate specifically to Leonardo's Ginevra de' Benci, one of only three female portraits painted by the master. The works of art on view illustrate the broad shift that occurred in this period from the profile portrait to the three-quarter or frontal view of the sitter. Over time the portraits of women also became larger in scale, more elaborate, and more communicative with the viewer.

Ginevra de' Benci (1457–c. 1520) was an aristocrat from 15th-century Florence, admired for her intelligence by Florentine contemporaries. She is the subject of a portrait painted by Leonardo da Vinci. The oil-on-wood portrait was acquired by the National Gallery of Art in Washington, D.C. in 1967, for US$5 million paid to the Princely House of Liechtenstein. It was a record price at the time, and the money was provided by the Ailsa Mellon Bruce Fund. This portrait is currently the only painting by Leonardo in the Americas (Hand 2004).

It is known from three written sources that Leonardo painted a portrait of Ginevra de' Benci in 1474, possibly to commemorate her marriage that year to Luigi di Bernardo Niccolini at the age of 16. The painting's imagery and the text on the reverse of the panel support the identification of this picture. Directly behind the young lady in the portrait is a juniper tree. The reverse of the portrait is decorated with a juniper sprig encircled by a wreath of laurel and palm and is memorialized by the phrase VIRTUTEM FORMA DECORAT ("beauty adorns virtue"). The Italian word for juniper is "ginepro", which suggests that the juniper motif was used here as a symbolic pun on Ginevra's name. Fittingly, juniper was also a Renaissance symbol for chastity. The portrait is one of the highlights of the National Gallery of Art, and is admired by many for its portrayal of Ginevra's temperament. Ginevra is beautiful but austere; she has no hint of a smile and her gaze, though forward, seems indifferent to the viewer. A strip from the bottom of the painting was removed in the past, presumably due to damage, and Ginevra's arms and hands were lost. Using the golden section, Susan Dorothea White has drawn an interpretation of how her arms and hands may have been positioned in the original. According to Giorgio Vasari, Ginevra de' Benci was also included in the fresco by Domenico Ghirlandaio of the Visitation of Mary and Elizabeth in the church of Santa Maria Novella in Florence, but it is now believed that Vasari made a mistake and that Ghirlandaio painted Giovanna Tornabuoni.