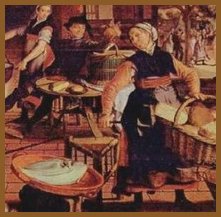 A typical Renaissance family consisted of parents and their children. It is traditionally assumed that people of the Renaissance married early. This is because nobility did indeed marry early. However, most common folks married in their mid twenties. Since the average life expectancy was 40, few people made it to grandparent status. 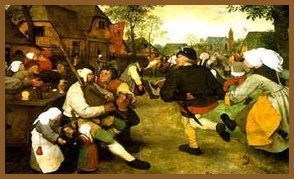 Renaissance women, as expected, stayed home to care for the children and the home. The men in the family worked out of the house, tending the fields or in merchant shops. Older children, both boys and girls, often worked alongside their fathers, to help contribute to the family funds.

Houses were small, some with no more than two rooms with low ceilings. It would not be considered unusual for a family of four to share a single bed. Fireplaces were used for cooking, causing the tiny house to quickly fill with smoke. In the hot summer months, houses in southern Europe would be unbearably hot, causing women to set up their looms outdoors, and serve family meals outdoors as well.

Household possessions were simple, to say the least. A typical Renaissance family owned two outfits and one pair of shoes per person, some kitchen utensils, the aforementioned bed, a chamber pot, a table and bench, a chest, and a few tools. 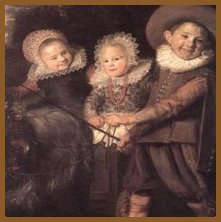 Children during the Renaissance were thought to be miniature adults, and therefore, as soon as they were out of nappies they would be dressed like adults, and spoken to as adults. Despite this grown-up treatment, children still had childhood toys and games to keep them occupied until they were deemed old enough to work, at around age seven or eight.

Toddlers were often confined to a wooden walker, to prevent them from wandering off, or tied to something with a long rope. This was important because a typical Renaissance house was full of burning fires, pots of boiling liquid.

Boys stayed home with their mother until about the age of seven. Then they may go to a private school, or be tutored, if the family could afford it. If they came from a poor family boys would be sent as a servant in a wealthy household. At age fourteen boys could enter into an apprenticeship.

Girls stayed home with their mothers, learning the necessary skills to run a household. If their family was poor, than the girls may be put to work as domestic servants in wealthy households. A female was considered a “girl” until she married. If a woman never married, she was never considered fully grown. Wealthier girls received a limited education, focusing on history, Latin, and geography, and the skills needed to be a good wife. Few women received an education equal to that of males.

In the Renaissance period society was divided into two classes, the nobles and the common folk. Common people depended on the nobility for protection; from invaders, acts of God and starvation. But life for the nobles was also dependent on the work of the serfs, peasants and labourers.

Below we'll take a look at some of the jobs performed by the less privileged class.