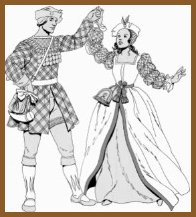 Our knowledge of 15th century Italian dances comes mainly from the surviving works of three Italian dance masters: Domenico da Piacenza, Antonio Cornazzano and Guglielmo Ebreo da Pesaro. Their work deals with similar steps and dances, though some evolution can be seen. The main types of dances described are bassa danze and balli. These are the earliest European dances to be well-documented, as we have a reasonable knowledge of the choreographies, steps and music used.

Villagers would dance to have fun. Dances often took up the entire village, with those who could play instruments taking turns playing for the dancers. Holidays were often celebrated with a feast and a dance. The beginning of spring was celebrated with a dance, the end of planting season, the longest day of summer, a successful harvest, all were celebrated with food and with music.

Country dances were considered rougher than those dances done by the nobles, they were often faster, wilder, involved much more swinging your partner and dancing round and round until you are out of breath. Sometimes the dances were even contests between the dancers and the musicians to see who could speed up and keep up until either the dancers or musicians collapsed. Villagers danced to leave behind the drudgery of their everyday lives.

Nobles also danced to have fun and to escape the tedium of their lives, but they danced very differently. They danced to show off. Dancing masters would teach elaborate steps, musicians were hired to play complex songs, and tailors would sew fancy clothing. Dancers were always conscious of being watched and judged by their peers. Nobles would stand with perfect posture, they would show off their feet with fancy footwork, and show off their grace with sweeping bows. Courtly dances were a chance for men and women to flirt, for visiting nobles to get to know their hosts, and for everyone to forget their responsibilities and just dance.