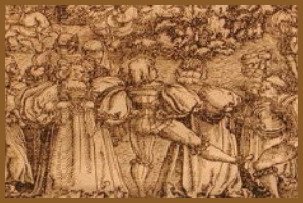 Dancing was a favourite pastime in the Renaissance and was an elegant form of exercise and an expected social skill for the nobles. There were basically two types of social dances. The first type were simple dances that were performed by an unlimited number of people. These dances were usually performed in circles or lines. The second type were more complex dances that required a dancing master and practice. These complex dances were usually performed for an audience. The important part of the 16th century dance was the footwork. The bulky clothing of the Renaissance limited the upper body movement, both in men and women. Women wore corsets at this time, and the men's clothing had tight lacing on the upper body.

The Renaissance produced three important dance masters who wrote a treatises on dancing: Thionet Arbeau, Cesare Negri, and Fabritio Caroso. All three wrote detailed explanations of the different kinds of dances and how they were to be performed. All three treatises describe similar dances and steps, which shows that the court dances throughout Europe at that time were international.

Dancing in the Renaissance also brought about some new instrumental compositions written primarily for dancing. The dance music of the Renaissance was written for instruments such as the sackbutt, lute, viol, pipe and the tabor. Some of the music was still improvised, but a good portion of the dance pieces were published in collections by Pierre Attaingnant.