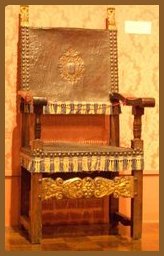 The Renaissance furniture in Italy was influenced by the Greek and Roman Antiquities, and its development was favored by the interest so many wealthy people had in Arts.

Similar to the Gothic style, the furniture of the Renaissance period was reflecting the architectural forms and ornaments. The unique Italian Gothic was already coexisting with Renaissance elements since the 14th century, and in the 15th century, the return to classic forms had immediate results in the form and ornamentation of the furniture. The Italian Renaissance furniture had a palatial rather than domestic character. Its carving fully expressed the spirit of the Arts revival, to such an extent that cabinet-makers from all over Europe came to learn from their Italian counterparts. Thus, furniture styles on the continent were heavily influenced by the Italian Renaissance. The cabinet-makers of the Renaissance partially abandoned the coarser oak, and began to use walnut, chestnut, and other woods. As opposed to Gothic, which was using subjects taken from saints’ lives, Renaissance carving had mythological, allegorical, and historical subjects. Following the architectural lines, earlier cabinets and paneling took the forms of palaces, the fronts of cupboards often representing miniatures of basilicas' façades. During the 16th century, the number of chairs increased. Beside the carved, rectangular, high-back chairs, there were the X-shaped curule or Savonarola chairs. This type was a smaller and more comfortable chair. It was carved, sometimes gilded, and could have a wooden seat with a cushion placed on it. Toward the end of the century, chairs were occasionally upholstered in silk, leather, or tapestry. The typical Renaissance table was rectangular and supported by solid carved consoles connected by heavy stretchers, with the legs terminating sometimes in a scroll. The tops could sometimes be slabs of marble or mosaic, while the ornaments of the tables were carved or gilded. Chests were common, particularly the cassone, used mainly as a marriage chest. Their ornamentation varied, they were carved, painted or gilded. The forms also varied, from the sarcophagus to chests with rectangular sides. 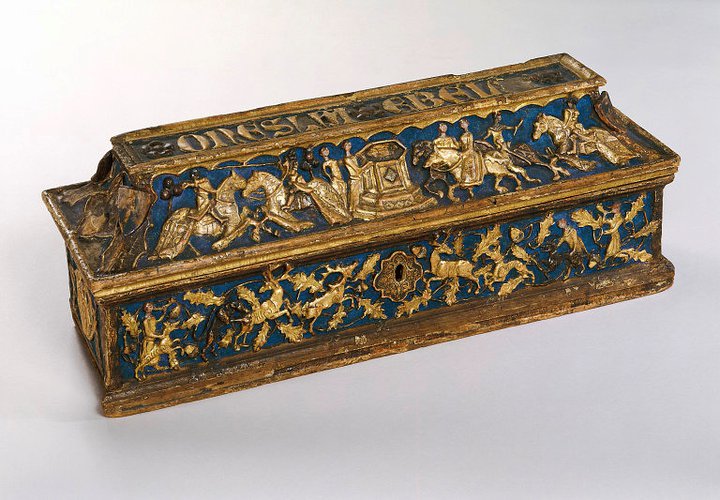 This casket or forzerino is thought to have been made in Florence in about 1400, and would have served as an engagement present from a future husband to his betrothed. It is decorated with hunting scenes, the fountain of love and the wounde...d stag, which was as much a symbol of love as of the chase. The lid is inscribed onesta e bella , 'honourable [or rather, chaste] and beautiful', words befitting such an occasion. This lavishly decorated object is both parcel-gilt (that is, parts of its are gilded) and painted blue, a colour that was extremely expensive. Such luxury would have gone against the recommendations of the sumptuary laws that came into force in Florence in 1356 and were aimed at keeping the cost of weddings down. When it was acquired by the Museum in 1890, it cost the hefty sum of £467 9s 7d (£467.48), reflecting its lavish decoration and its romantic subject matter. No doubt the Victorians' love of all things to do with Medieval chivalry and courtly romances made it such a sought after item. - Victoria and Albert Museum. Thanks to BorgiaUnicorn for the information on The Borgias: A Family Chronicle: Facebook. 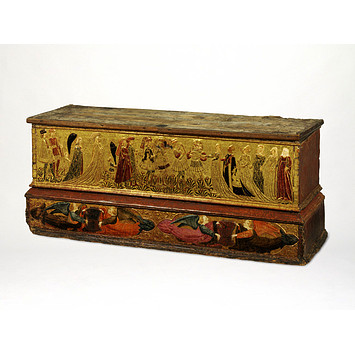 Marriage chests or cassoni were made in pairs. They were emblazoned with the coats of arms of the relevant families and often decorated with wedding scenes. A number of figures on this example wear Burgundian fashions, which were much in vogue in Florence between about 1425 and 1450. Early records do not tell us where this cassone came from, but it was bought by this museum for £40 in 1863, possibly from William Blundell Spence, a flamboyant English dealer based in Fiesole (just outside Florence), or from Giuseppe Baslini, a dealer from Milan, who in 1869 sold this museum the front panel (Museum No. 21 - 1869) of what could once have been its pair. This item is a rare example of a surviving cassone that almost certainly retains its original base, as well as remaining largely unaltered. Victoria and Albert Museum

After the expeditions of Charles VIII in Italy, the French furniture, fashion, and arts, were all revived by the Italian spirit. Everything was made in the Italian style. The old "Prie-dieu" chair became larger, with a more ornate back. The large high-backed chairs and the arm-chairs were adorned with the highly elaborated carving of the Renaissance, in France still combined with Gothic elements.

The most important French furniture style in the Renaissance period was the Henry II style. Great French designers applied their original ideas to the Italian model, looking at the classical forms from a different angle than that of their Italian predecessors. Cabinets had doors with richly carved panels in the upper part, which, when opened, were revealing drawers with finely detailed carved front. The oak bedstead illustrated here is typical for the French Renaissance furniture. It belonged to Jeanne d'Albret, mother of Henri IV.


Renaissance Furniture in the Netherlands

As with other schools, the Dutch and Flemish Renaissance furniture of the 16th century was influenced by the works of the Italian craftsmen. The furniture was initially made almost exclusively of oak, then ebony and other exotic woods were introduced. The intricate carving, characteristic for the Low Countries Renaissance furniture, will attain his best in the 17th century, when the artists here will cease to take the Italian works as models. Their original work will establish what was to be known as the “Flemish Renaissance”.

The Renaissance furniture in England is the furniture of the Tudor reigns. Although historically the period lasted until the beginning of the 17th century, the Elizabethan furniture, with its distinct character, stands on its own. The Tudor furniture was a combination of Gothic and Renaissance, with fine carving depicting biblical or mythological scenes. Until the reign of Elizabeth I, the Italian influence was predominant, together with Flemish and even German elements. Although French and Italian pieces were still around, the Elizabethan furniture introduced its own new decorative elements. Heraldic motifs were introduced, together with the bulb decoration used on table legs or cabinet supports. Maybe the most representative of the English Renaissance furniture are the posts and the corniced canopies of the massive four-posted Elizabethan beds, their elaborate carving illustrating the distinct character acquired by the furniture of this period.