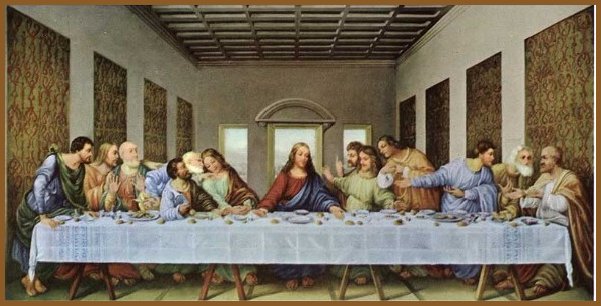 "We asked ourselves why Da Vinci chose those particular foods, because they don't correspond to what the Evangelists described," says Bauer. "Why bread, fish, salt, citrus and wine? Why is the saltshaker tipped over in front of Judas? Why is the bread leavened?"

The four researchers don't buy into the far-fetched hypotheses introduced by Dan Brown in his best-selling book, The Da Vinci Code, yet they agree the artist included symbols and commentary in his depiction. He purposely attempted to confuse and fool the observer with contradictory symbols and double-meanings.

For instance, a fallen saltshaker is traditionally a sign of bad luck. The researchers question if instead of indicating the mischief of Judas, the fallen saltshaker could suggest his rehabilitation. He could have been chosen to play the role of the traitor. And why is he the only one with an empty plate? It could mean he is full and mischievous or that he is the only one who isn't fooled?

The fish has also been the topic of several studies. It is clearly a reminder that Jesus spent most of his life around Lake Tiberias and that he selected his Apostles among local fishermen. Yet it isn't clear whether the fish is herring or eel. Some argue Da Vinci was deliberately ambiguous about the species of fish. Eel in Italian is aringa, although when it is spelled arringa it means indoctrination. And herring in northern Italy is renga, meaning he who denies religion.

The painting continues to fascinate and mystify. Its restoration, which took place between 1979 and 1999, has brought to light new details that along with new technology has spurred a new wave of research and interpretation of one of the world's most famous artworks. 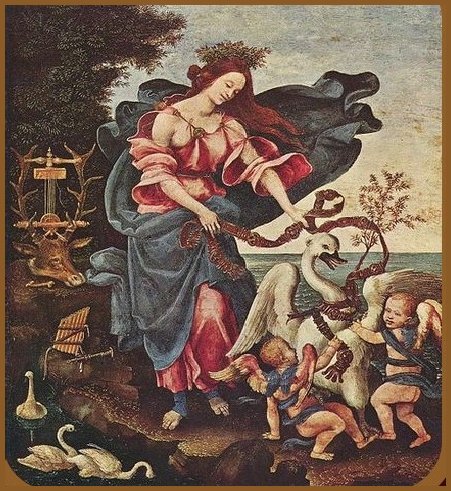 This idyllic, playful composition, which has been considered the allegory of music for a long time, intimates complicated relationships. Nothing seems to indicate, however, that it belongs to one of a series of paintings symbolizing the seven liberal arts. We have no certain data on its original purpose. The painting probably shows the Muse Erato leading a swan by a golden leash. The swan, an attribute of Apollo, may be associated with Music as well; its symbolic role is based on the fact that it miraculously sang before its death; thus the concept of the swan song.

There is a lyre of a peculiar form in the painting. Such a fantastic instrument more than likely would have been unsuitable for playing. Its frame is a head of a stag, and the strings are stretched across the cross-bands mounted on the antlers. The painter even placed a piece of bone next to it. The stag has been used by painters to represent Hearing because of its keen ears; thus it may be connected with the concept of music. It is proposed that in the form of a winged putto even Zephyrus may have a role in the depiction of music, since the swans sing only when the mild western wind blows, while the musicians require a certain breath of personal glory to inspire them to play. The putti who play with the swan, on the other hand, may belong to a third female figure, Leda. Jupiter, in the form of a swan, seduced her, and their love bore two sets of twins, although in paintings usually only two children are depicted. 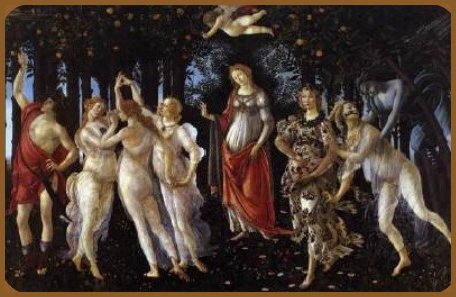 Botticelli
La Primavera
1482
Reading from right to left, we see the nymph Chloris being hotly pursued by the puffing wind god Zephyr. We know in the legend that Zephyr marries Chloris after raping her. Turning to him, Chloris seems to be sprouting flowers from her mouth. Is she being transformed into Flora, the goddess of flowers (the third figure) by her encounter with Zephyr?

Above, floating amid the fruit trees, is Cupid who bends his bow ready to shoot an arrow of love in direction of the Three Graces. The Graces are the three daughters of Zeus by Eurynome. Oblivious to everything around them these exquisite young women are engaged in some kind of dance. Blindfolded, Cupid seems to be aiming the arrow at the woman in the center. Zeus only knows what will happen when the irresistible shaft enters her. Is she about to look at Mercury or into the far blue horizon beyond him? Finally in the very center of the painting stands Venus the pagan goddess of love presiding over these festivities. What is crucial is that Botticelli has put Venus where he normally would have put the Virgin Mary, the center of Christian art. And his Venus is a remarkable look-alike for his Mary. 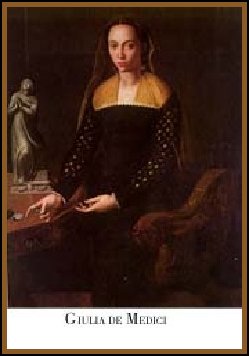 Giulia Romola di Alessandro de' Medici (c. 1535 – c. 1588) was the illegitimate, possibly biracial, daughter of Alessandro de' Medici, Duke of Florence and his mistress Taddea Malaspina. Following her father's assassination, she was reared at the court of Cosimo I de' Medici and married advantageously twice.

Along with her father Alessandro de Medici's uniquely racial place in history, Giulia de Medici's portrait could also prove of some importance since an apologia for her blackness forms the basis of the iconographical elements of the painting. Due more than likely to Giulia de Medici's social position as a princess and the descendant of a number of popes, whoever assisted the artist with the symbolism he used obtained it from the Neo platonic concept of God as Divine Darkness still current in the theology of the time. Probably the most readily available exposition of this particularly Franciscan brand of mysticism was St. Bonaventure's Itenarium mentis in Deum orThe Soul's Journey to God. To fully appreciate the symbolism that was attempted in this portrait it should be pointed out that the Medici were in religious state matters, officially devoted to St. Francis.

Behind Giulia on her left can be seen an ornately carved chair of state. In an 1982 article, Gabrielle Langdon, a Canadian art scholar, pointed out the artist had used the incline of the armrest to depict upwardly sloping terrain. She explained that the climbing figure she was able to discern with the help of x-ray equipment, had been meant as the spiritual aspect of the comparatively larger sleeping figure, which is a representation of Hercules. Professor Langdon maintains the scene is an allusion to the Choice of Hercules, a popular Renaissance allegory illustrating the hero on the upward path to Virtue as he disdains the attraction of Vice. Returning to a more overtly Christian reading, it would also appear that a mountain, Monte la Verna, is in fact, also being alluded to. This geographical spot, after all, is precisely where St. Bonaventure received the inspiration to write his Itenerarium. The reason for the Saint's visit to Monte la Verna was that this was where St. Francis, during a vision of a crucified six-winged Seraph, had become a stigmatic by miraculously acquiring the wounds of Christ.

From the anecdotes regarding Alessandro's blackness and how opposition political factions tried throwing it in his face, the epithet that apparently most upset him was da Collavechio. Since moro would not have been as insulting back in the 16th century before the Battle of Lepanto, the fact that his mother, Simonetta, had subsequently married a mule driver from Collavechio was, instead, used to great advantage by his enemies who would taunt him as Alessandro da Collavechio. I do not think, therefore, that it would be reaching too far to suggest that some kind of parallelism is to be understood between colla vechio or the old hill and Monte la Verna or the Mount of Spring or New Mount. Is Giulia not pointing to the theological speculation of God as Divine Darkness or Blackness associated with the latter Monte as some kind of justification or defense of the ethnic definition of her grandmother so inextricably tied to the former hill? I would be surprised if she isn't.

The six wings of the seraph became for St. Bonaventure, the six stages of the journey through which the soul must progress. To the Renaissance mentality so infatuated with Greco Roman imagery, the cameo of Mercury who also has six wings: two on his heels, the two of his caduceus or staff and the pair on his helmet is, therefore, a classical reference to the Seraph of St. Francis. Dr. Langdon's supposition that the medal of Bacchus Giulia so instructively point to is a Neo platonic allusion is not only accurate, it is the key to understanding the iconographical program around which this portrait was painted. The patristic source of St. Bonaventure's ideas is none other than Dionysius the Aereopagite. Dionysius, considering Giulia's African ancestry, is extremely important since he is one of the earliest of the Church's teachers to describe God as the...Ineffable and Divine Darkness. Since Bacchus is simply the Roman version of the Greek Dionysius, the medallion is obviously meant to remind the viewer of the beatific vision which is the goal, the very objective of every soul as explained in St. Bonaventure's "Itenerarium."

In summary, this painting offers a surprising theological way of thinking about blackness (just as more Aristotelian references to God have reinforced archetypes of whiteness since the Age of Enlightenment.) As one of the first persons of colour in modern history whose response to racism has been recorded, Giulia de Medici's magisterial pronouncement is of utmost importance to those of us in the new world who are still suffering from the results of this ugly social phenomenon. Furthermore, because of Giulia de Medici's relation to the centers of temporal and spiritual power at the time, the defense she prepared for herself was the most authoritative. She employed a Neo platonic premise which is canonically irreproachable even by those standards which are adhered to by the most conservative curriculum advisers today. Furthermore, whatever interest is triggered by the theological mysticism that informs this painting, it should not create the kind of academic controversy more Afro Centric ideas tend to provoke. For like St. Bonaventure's "Itenerarium" which is the key to this particular painting by Allori, there are centuries of western religious speculation that evolved precisely along these lines.

This portrait of Giulia de Medici could easily become in the field of Black Studies, a very significant work. Instead of being simply a portrait of an Italian princess whose identity as a quadroon is interesting, it shows her breathtaking reaction to whatever apprehensions she might have felt regarding her African descent With whatever theological authority she can claim, she reminds her contemporaries that God, in His Ineffable Unknowability, is also Black.