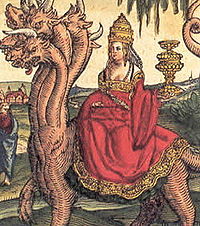 In order to enter the sacred religious order, a woman decides to disguised as a man in the 9th century (855-858)
... according to what history says.

She also did it this way because so could have sex with different men.

After a while she had an important place within the order and is chosen Pope.

But one day she got pregnant, she was hiding her pregnancy under her cassocks and nobody noticed.

The day came that she had to go on a procession in Rome, and during the procession, she gave birth in the middle of the street.

But all the people of Rome became so enraged when they saw that she had betrayed them, and they stoned her and the baby to death .

This is the story of the medieval era that historians say.