Siena's origins, like other tusacn sites, are traced back to the acnient Etruscans who settled the area between about 900-400 BC. The Saina people lend their name to the later Roman town at the location: Saena Julia, that was founded arounf 70 AD. In the late medieval period, the following legend of Siena's origins was fostered: the town was founded by Senius, son of the orphaned Remus (brother of Romulus) who was suckled by a she-wolf. This accounts for the city's emblem of the nursing she-wolf evident in many places around the city. Like the rest of Tuscany, Siena was conquered by several waves of Lombard invasion starting in about 550 AD and somewhat ending about 774, with the conquest of the Franks under Charlemagne. After the Investiture Controversy between Pope Gregory VII and Emperor Charles IV, the feudal-aristocratic system gradually declined and was infiltrated by the widespread commercial growth and merchant-banking developments taking place all over Europe. By the 1100s Tuscany was no longer simply a subject of the Empire, and the Papacy didn't quite exert their control over the area because of their troubles with the Empire. The city's territories remained semi-autonomous in the absence of either papal or imperial (via aristocratic) rule. 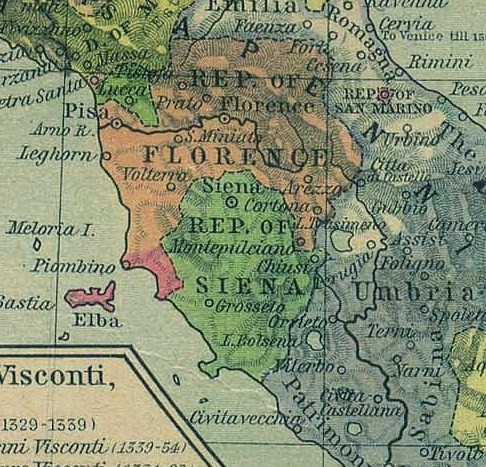 In the early 12th century a self-governing commune replaced the earlier aristocratic government. The consuls who governed the republic slowly became more inclusive of the poblani, or common people, and the commune increased its territory as the surrounding feudal nobles in their fortified castles submitted to the urban power, which was made up of nobles, tradesmen, and officials. Siena's republic, struggling internally between nobles and the popular party, usually worked in political opposition to its great rival, Florence, and was in the 13th century predominantly Ghibelline in contrast to Florence's Guelph Dante's Commedia position (this conflict formed the backdrop for some of ). Walls were built to totally surround the city, and a second set was finished by the end of the 13th century. Substantial sections of the medieval walls still exist today.

Siena's university, founded in 1240 and famed for its schools of law and medicine, is still among the more important Italian universities. Siena rivalled Florence in the arts throughout the 13th and 14th centuries: the celebrated mural of "the Effects of Good Government" by Ambrogio Lorenzetti in the Palazzo Pubblico, or town hall, is a magnificent example of late-Medieval/early Renaissance art as well as a representation of the ideal of urban society as understood by its constituency. Siena was devastated by the Black Death of 1348, and also suffered from several financial undertakings that failed. In 1355, with the arrival of the Holy Roman Emperor - Charles IV of Luxembourg - in the city, the population rose and suppressed the government of the Nove (Nine), establishing that Dodici (Twelve) nobles assisted by a council with a popular majority. This was also short-lived, being replaced by the Quindici (Fifteen) reformers in 1385, the Dieci (Ten, 1386–1387), Undici (Eleven, 1388–1398) and Twelve Priors (1398–1399) who, in the end, gave the city's seigniory to Gian Galeazzo Visconti of Milan in order to defend it from the Florentine expansionism. 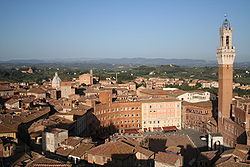 The Republic of Siena

In 1404 the Visconti were expelled and a government of Ten Priors established, in alliance with Florence against King Ladislas of Naples. With the election of the Sienese Pius II as Pope, the Piccolomini and other noble families were allowed to return to the government, but after his death the control returned into popular hands. In 1472 the Republic founded the Monte dei Paschi, a bank that is still active today and is the oldest surviving bank in the world. The noble factions returned in the city under Pandolfo Petrucci in 1487, with the support of Florence and of Alfonso of Calabria; Petrucci exerted an effective rule on the city until his death in 1512, favouring arts and sciences, and defending it from Cesare Borgia. Pandolfo was the first of any noble citizen to achieve the highest degree of power under the republican system. He did so through a series of internal administrative coups. For example, he rose high in the palace guard by being faithful and creating a network of support, only to take the city by virtual force in 1496 with the help of the military arm of the governement with which he worked closely since his return over ten years before (Nevola, p. 195).

Pandolfo was succeeded by his son Borghese, who was ousted by his cousin Raffaello, helped by the Medici Pope Leo X. The last Petrucci was Fabio, exiled in 1523 by the Sienese people. Internal strife resumed, with the popular faction ousting the Noveschi party supported by Clement VII: the latter sent an army, but was defeated at Camollia in 1526. Emperor Charles V took advantage of the chaotic situation to put a Spanish garrison in Siena. The citizens expelled it in 1552, allying with France: this was unacceptable for Charles, who sent his general Gian Giacomo MediciPiero Strozzi. When the latter was defeated at the Battle of Marciano (August 1554), any hope of relief was lost. After 18 months of resistance, it surrendered to Spain on 17 April 1555, marking the end of the Republic of Siena. The new Spanish King to lay siege to it with a Florentine-Imperial army. The Sienese government entrusted its defence to Philip, owing huge sums to the Medici, ceded it to the Grand Duchy of Tuscany. A Republican government of 700 Sienese families in Montalcino resisted until 1559.

*From the article: http://en.wikipedia.org/wiki/Siena This Wikipedia File is used in compliance with the Creative Commons Act (Wikipedia) - http://creativecommons.org/licenses/by-sa/3.0/