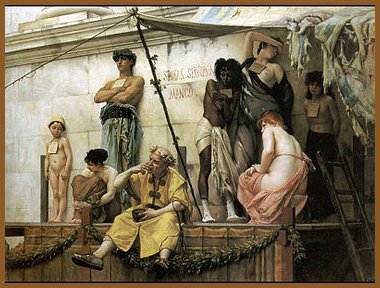 Spain had to fight against relatively powerful civilizations of the New World. However, the Spanish conquest of the indigenous peoples in the Americas was also facilitated by the spread of diseases (e.g. smallpox) due to lack of biological immunity, (like the Europeans that had lack of biological immunity to African diseases) The Spaniards were the first Europeans to use African slaves in the New World on islands such as Cuba and Hispaniola, where the native population starved themselves rather than work for the Spanish. Although the natives were used as forced labor (the Spanish employed the pre-Columbian draft system called the mita), the spread of disease caused a shortage of labor, and so the Spanish colonists gradually became involved in the Atlantic slave trade. The first African slaves arrived in Hispaniola in 1501; by 1517, the natives had been "virtually annihilated" by the settlers. 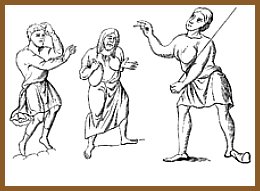 Costumes of slaves or serfs, from the sixth to the twelfth centuries, collected by H. de Vielcastel, from original documents in the great libraries of Europe.
Chaos and invasion made the taking of slaves habitual throughout Europe in the early Middle Ages. St. Patrick, himself captured and sold as a slave, protested an attack that enslaved newly baptized Christians in his Letter to the Soldiers of Coroticus. In the Viking era starting c. 793, the Norse raiders often captured and enslaved peoples they encountered. In the Nordic countries the slaves were called Thralls (Old Norse: Þræll). Germanic laws provided for the enslavement of criminals, as when the Visigothic Code prescribed enslavement both for those who could not pay the financial penalty for their crime , and for those who were to be delivered up as slaves to their victims, often with their property. In Carolingian Europe approximately 20% of the entire population consisted of slaves. Some people gave themselves to powerful landowners in order to receive protection or food; one Anglo-Saxon will has a land-owner freeing those slaves who had "given her their heads for food." Anglo-Saxons continued and expanded their slave system, sometimes in league with Norse traders. About 10% of England’s population entered in the Domesday Book in 1086 were slaves. Chattel slavery of English Christians was discontinued after 1066, when William of Normandy conquered England. The slave trade in England was abolished in 1102. The restoration of order as the early Middle Ages passed was accompanied by the transmutation of this state into serfdom, and after the earlier portions, slaves were seldom of the same country as their owner in Western Europe.

Between the 6th and 10th centuries AD, members of pagan Slavonic peoples were taken prisoner by the Khazars, Kypchaks and other steppe peoples and taken to the slave markets in Crimea. In addition, during the wars between the pagan Slavonic states and Christian states of Europe, many prisoners of war from both sides were sold as slaves. After the Muslim conquests of North Africa and most of the Iberian peninsula, the Islamic world became a huge importer of slaves from Eastern Europe. The trade routes were established between slave trade centres in the pagan Slavonic countries (for example Prague and Wolin) and Arab metropoles in the Muslim-controlled regions of the Iberian peninsula (Al-Andalus). Because of religious constraints, the slave trade was monopolised by Iberian Jews (known as Radhanites) who were able to transfer the slaves from pagan Central Europe through Christian Western Europe to Muslim countries in Al-Andalus and North Africa. However, the converted Christian ruler Mojmír I of the Great Moravian Empire taxed the slave caravans that passed through his lands, providing an important source of revenue, if indirectly. This trade came to an end in the 10th century after the Christianisation of Slavic countries. Slavery in medieval Europe was so common that the Roman Catholic Church repeatedly prohibited it—or at least the export of Christian slaves to non-Christian lands was prohibited at, for example, the Council of Koblenz in 922, the Council of London in 1102, and the Council of Armagh in 1171. William the Conqueror, too, banned export of English slaves. The medieval slave trade was mainly to the East: Byzantine Empire and the Muslim World were the destinations, pagan Central and Eastern Europe an important source. The Persian traveller Ibn Rustah described how Swedish Vikings, the Varangians or Rus, terrorized and enslaved the Slavs. So many Slavs were enslaved for so many centuries that the very name 'slave' derived from their name, not only in English, but in other European languages and in Arabic. The Mongol invasions and conquests in the 13th century made the situation worse. The Mongols enslaved skilled individuals, women and children and marched them to Karakorum or Sarai, whence they were sold throughout Eurasia. Many of these slaves were shipped to the slave market in Novgorod. Genoese and Venetians merchants in Crimea were involved in the slave trade with the Golden Horde. Between 1414 and 1423, at least 10,000 eastern European slaves were sold in Venice. Genoese organized the slave trade from the Crimea to Mamluk Egypt. In 1441, Haci I Giray declared independence from the Golden Horde and established the Crimean Khanate. For a long time, until the early 18th century, the khanate maintained a massive slave trade with the Ottoman Empire and the Middle East. In a process called the "harvesting of the steppe", they enslaved many Slavic peasants.