The Major Italian States in the 15th Century 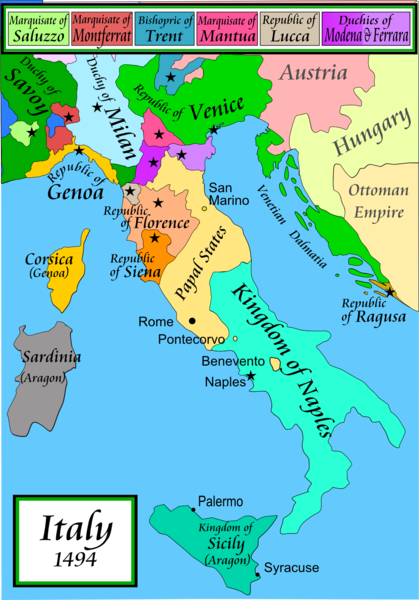 The Papal States (see map in light yellow)
were a collection of mostly adjacent territories held in fief (owed tribute and allegiance to the papacy/Holy See) by vicars (appointed archbishops and civil lordships) in the regions of the Romagna, Marche, Umbria, and Lazio. Although theoretically vassals of the pope, the lords of cities in the Papal States (even regions in and around Rome itself) were actually ruled (for much of the 14th and 15th centuries) in the interests of autonomous, despot lords, most of whom overtaxed their subjects to live extravagantly. Some of the larger and economically vital city-states were Rimini, Faenza, Imola, Forli, Cesena, Pesaro, Ancona, Civitavecchia, and Viterbo.

Rome and its environs were the center of the Papal States (Holy See - other properties across south-central Italy). However, up until Alexander IV's papacy, the many cities and territories around Rome were controlled by Roman barons such as the Caetani, Orsini and Colonna families. Their allegiance and enmity of the pope was a factor in the Italian Wars and Alexander's domestic policy of consolidation of these cities.

Bologna was an ancient city-state in the Emilia-Romagna region (map: just north of Florence). It was virtually independent from the Holy Roman Empire from 1439, but formally existed as an ally and subject of the pope. The city finally fell under the full authority of the Papal States in 1506. It was a wealthy, vibrant center for the arts and notably for its university, the Studio - the oldest university in Europe.

Ferrara and Modena (see map above in light lavender and fuschia, north of the Papal States) was an independent duchy that broke free from Imperial and Papal control during the reign of Pope Sixtus IV. It was considered one of the cultural centers of Italy, especially poetry, theater, and music. Building improvements during the rule of the beloved House of Este made the city into one of the finest and well-planned in Italy. The Este also controlled the duchy of Modena, in personal union with Ferrara. 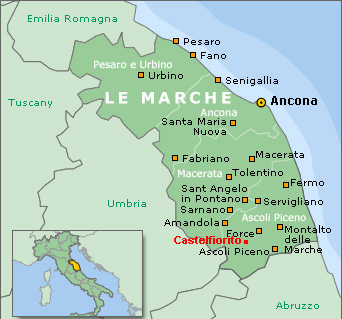 Urbino was a small but wealthy duchy in the Marche region (pronounced "Mark-ay," see Le Marche map at left). The city was a mecca for humanist scholarship and a lively center of the arts. The ancient house of Montefeltro ruled Urbino for the pope with fairness and stability. Its Renaissance rulers, Federico and Guidobaldo, were pioneers in the transformation of the ideal court as a place for women as well as men. Many artists and musicians flocked to Urbino under the wise and benevolent rule of the Montefeltro dukes.

Other important cities in the Marche region are Pesaro, Senigallia, and Ancona. 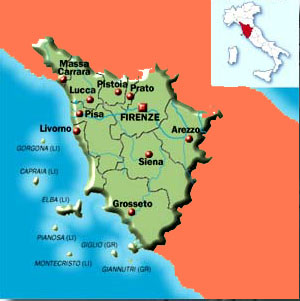 Florence was the artistic capitol of Italy and is considered the birthplace of humanism and the renascimiento, "rebirth of classical learning," the Renaissance. The city has also traditionally been known for its cloth and wool industry and more recently known as the banking center of Europe. It was also an important republic, although had been dominated by the Albizzi and the Medici. During the time of Alexander VI, Florence was a republic with a Gonfaloniere of Justice (Piero Soderini) that sat for life.

Siena was a large Tuscan state south of Florence. The republic existed as an independent republic until 1555 when it was conquered by Spain's imperial armies and integrated into the Republic of Florence (creating the Grand Duchy of Tuscany). During the last quarter of the 15th century, Siena was dominated by the Petrucci Family, notably Pandolfo IV, a great patron of Renaissance artists, who did much to increase its prosperity and beautify the city.

Pisa was an important port city in Tuscany, famous then for its University (and now for its leaning cathedral tower). In 1494 Charles VIII of France invaded the Italian states to claim the Kingdom of Naples, Pisa took the opportunity to reclaim its independence as the Second Pisan Republic. But the new freedom did not last long. After fifteen years of battles and sieges, Pisa was reconquered in 1509 by Florence.

Lucca was an ancient Tuscan state that existed from 1160 to 1805. It was a tiny free commune and then republic sandwiched between two great territorial powers of Milan and Florence. Lucca is the only city in Italy to still have its original bulwark (defensive walls encircling the city) built during the Renaissance in a state of excellent and complete preservation.

Venice was the most powerful of the Italian states and commanded a maritime trade network that extended across Europe, Scandinavia, Russia, the Mediterranean, North Africa, and Near East. Its navy was equally powerful. Although for centuries the Venetian Empire had focused on ruling its Aegean and Mediterranean holdings and trading with the entire known world, due to the Ottoman threat, Venice had by 1460 turned to the Italian Peninsula for alliances. Although probably the most powerful state, Venice was one of the few republics in Italy at this time.
During the time of the Borgias, Venice patrially controlled the Lombard cities Bergamo and Brescia - or were in dispute with the pope and Milan for these and other important cities. Padua and Verona are also culturally and politically important cities that owed alliegance to the Republic of Venice in the late 15th century. 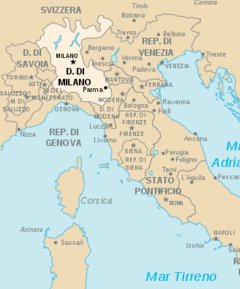 Milan, a powerful ex-imperial duchy between Savoy and Venice, was strategically located in the fertile Po Valley, Lombardy. Its location and size made it a major center of international trade and agriculture. It was a leading international player in politics during the pontificate of Alexander VI. In the previous century, the old Visconti family had been replaced by the condottieri Sforzas as the dukes of Milan. Some of the greatest artistic and military geniuses of the day were patronized by the Sforza dukes, Leonardo da Vinci was the foremost among them.

Mantua, east of Milan and southwest of Venice, was a small but sophisticated marquisate ruled by the Gonzaga family. Isabella d'Este - wife of the marquis, Francesco Gonzaga - was sister-in-law to Lucrezia Borgia. Isabella was called by her contemporaries "prima donna del mondo" - first lady of the world, due to her extensive patronage of all the arts, her successful rule of the city during Francesco's many absences, and for her noted intellectual prowess. Throughout the late 1490s Mantua was allied with Urbino and Ferrara by close blood-ties, alternately supporting the independence of princes, papal rule, and later French protectorship. 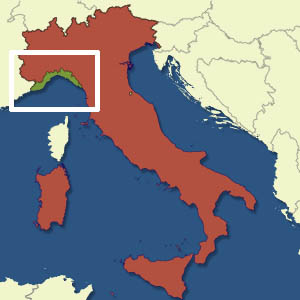 Genoa (see map at left, in green) was a wealthy and powerful independent republic competing with Venice for the rule over Mediterranean Sea. During the time of Borgias, however, Genoa was passing through a difficult period. France, then the Visconti and Sforza of Milan ruled the city for short periods until 1499. The Republic did not surrender to the invaders and it became rich, powerful and influential again in the 16th century thanks to Andrea Doria. The 16th century in Italian Renaissance is also known as El Siglo de Los Genoveses. Andrea Doria was ally to the Holy Roman Emperor Charles V, nevertheless, the Republic kept profitable commercial and financial activities with England. Genoa never supported the Papal policy in Italy although it had taken part to several Crusades.

Corsica (oval-shaped island just south of Genoa) was ruled by the Genoese from 1347 until 1729. Today Corsica is a French région, containing both Italian and French customs, cuisine, and traditions. 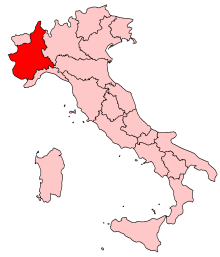 Savoy was a large independent duchy that existed between 1416 and 1713. Its territories (some areas are now in France) were made up of lands owned by the noble House of Savoy, which was bound to the Empire as 11th century counts. The years of the Renaissance in Europe witnessed the invasion and occupation of Piedmont by the French. When Charles VIII of France invaded Savoy, Piedmont, and Italy in 1494 and conquered Naples, the House of Savoy retreated and moved its seat to Turin, where it remained until the unification of Italy. The map highlights the modern region of Piedmont in red, which roughly equals 15th century borders.

Montferrat was a small marquisate ruled by the Greek imperial dynasty of the Palaeologo family since 1305. It bordered Savoy to the west and Milan to the east. It existed as a small neutral city-state mostly allied with the Gonzaga of Mantua until formally combined into a personal union in 1536 with the marriage of Federico II Gonzaga to Margherita Palaeologo.

Saluzzo was a small marquisate in the extreme northern region of Italy of Piedmont. The ruling family, unlike Mantua, played a neutral role in internal Italian politics during the late 15th century. During the Italian Wars, Saluzzo sided with the French. The noble House of Del Vasto ruled the tiny area from 1142 until 1548. Ludovico II Del Vasto periodically fought with neighbors Savoy and Montferrat.

Naples, the only Kingdom in Italy, was long under the rule of the Angevin dynasty and then under the Crown of Aragon. Hereditary rights over the investiture of the Kingdom of Naples had been in dispute between the ruling houses of Anjou (France) and Trastamara (Aragon/Spain) for centuries. Charles VIII invaded Naples in 1494 only to lose control to Aragonese forces in 1503. The result of the Angevin-Aragonese conflict was the brutal Italian Wars (1494 - 1559) that devastated southern Italy. The Crown of Aragon had long controlled the Italian islands of Sicily and Sardinia, which greatly aided them in the long struggle against France.

Sicily was an important region separated from the peninsula by a narrow channel. The ancient Kingdom of Sicily was founded in 1130 by the Norman Kings Roger II, and existed until 1861. At the time of its inception it covered not only the triangle of land adjacent to Naples, but extended up the entire southern half of Italy. The native Sicilians ousted the later Angevin kings, relegating them to Naples, and the kingdom passed to the Crown of Aragon. During the late 15th century, the Kingdom of Sicily was ruled by Spain's newly united kingdom under Ferdinand II (and Isabella of Castle) of Aragon (from 1468-1516). 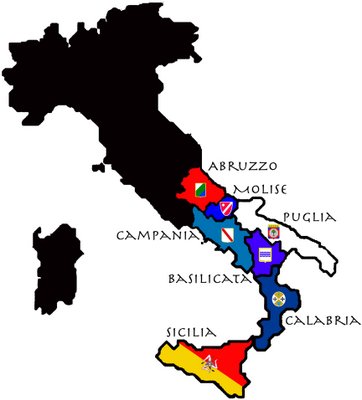 In the Late Middle Ages (1365-1409), Sardinia was conquered by feudal Aragonese rulers of Naples and Sicily. The original Aragonese kings passed the throne to the Crown of Aragon in 1479, and came under the crown headed by Aragons new king, Ferdinand II of Aragon similar to the kingdom of Sicily.