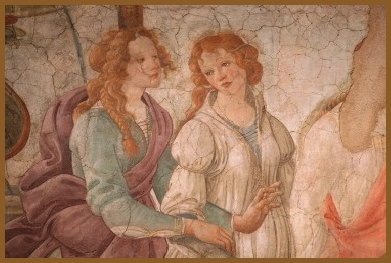 Artists and scholars of the early Italian Renaissance self-consciously believed they were innovators; that they had begun a fresh new era. They have convinced posterity too, that the era was revolutionary. Artists and scholars rigorously aligned themselves with antiquity and coined the term "Dark Age" of the "Middle Ages" as that dismissable millennium of lull in between. Thus it was the "light" of the Renaissance that they depicted as breaking through long dark night of Middle Ages: this was their interpretation of Petrarch's optimistic insistence and the subsequent myth.

More precisely, recent scholars have taken to calling this period instead the "Late Medieval" and the transition to the "Early Modern" period, because The Renaissance was not a time period, it was a movement occuring at different paces in all parts of Europe following the accomplishments of scholars, thinkers, and artists of the High Middle Ages. In Italy it is thought to have begun, standing on the shoulders of giants such as Marsilius of Padua, Dante Aligheri, Giotto di Bondone and Petrarch.

The Italian Renaissance can be seen as both a time period and a movement, following Swiss historian, Jacob Burckhardt's 19th century theory (The Civilization of the Renaissance in Italy) isolating its achievements in time and place, as a unique and paradigm-shifting literary and cultural revolution. The Renaissance in Italy - according to Burckhardt - is said to mark the beginning of the individual's effort to free himself from the rigidity of medieval feudal society and the Church. The dating for this period is difficult because it emerges and peaks at different times in various countries: in Italy the mid-1300s/1400s, especially in the visual arts; in England the late 1500s especially in drama. The Europe-wide Renaissance movement generally is seen to end in the mid-seventeenth century.

HUMANISM:First referring only to the study of the artes humanitas "the humanities" it became an idealized intellectual and literary movement growing out of the "rediscovery" of classical literature, art, architecture, etc. This essence emerges in Italy first, and the education of ruling classes now becomes based on the bible and classical theories. The "Renaissance man" is "well-rounded," which means well versed both in the liberal arts and in practical matters. Humanism supposedly marks a gradual synthesis of medieval philosophy and religion with human-civilization-centered ideals. The statesman was instructed in the proper roles of action vs. contemplation. In greater society, creativity does become more personal, less anonymous: artists now even sign their canvasses. The artworks depict a zest for life in this world and sensory delight, and nudity as an expression of the divinity of the human form is on the rise. Renaissance arts turn toward the world of the present: aimed at expressing the ideals of the new elite: wealth-seeking, political power, explorations in mechanical arts (aka science), new styles of art, and a more localized literature as a vehicle of newly emerging modern mind.

THE REFORMATION: To cleanse the corruption and idolatry of the Church, attempts to break and "return" to pure Christianity emerge, with emphasis on scriptures, not tradition; on faith, not works. Martin Luther nailed his "theses" on the church door in Wittenburg in 1517. The Reformation was born of and contributed to the break-up Christendom and to the secularization of society. Princely politics ascended over the Church, religion and nationalism began blurring.