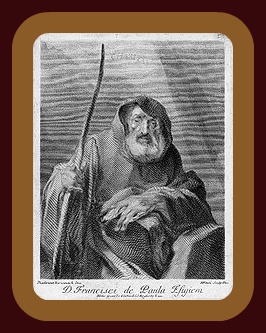 Minims (also called the Minimi or The Order of the Minims) are followers of a Roman Catholic religious order founded by Francis of Paola (above) in the fifteenth century in Italy. The order flourished in France until the time of the French Revolution. The name refers to their humility as the "least of all religious" and is derived from a passage in the Vulgate, specifically Matthew 25:40. The origin of the Minims dates to 1435 when Francis, after having completed the votive year (a year of service at Franciscan convent as promised by his parents for the grace they received through the intercession of St. Francis of Assisi) with the Franciscans and dedicated himself to a life of solitude, took on his first followers as the "Hermits of St. Francis of Assisi." Francis and his followers founded convents at Paterno in 1444 and Milazzo, Sicily in 1469. In 1471, the Archbishop of Cosenza granted them exemption from his jurisdiction. This status was confirmed two years later in 1473 by Pope Sixtus IV, who also granted the status as mendicant friars. The order did not have a written rule until 1493, 57 years after its founding.


The first rule, confirmed by Pope Alexander VI in 1501, was essentially taken from the rule of Francis of Assisi. Later that same year, Alexander VI confirmed a modified version of the rule containing ten chapters. This rule contained the vow of vita quadragesimalis, which is considered to be the distinctive feature of the Minim rule. This rule imposes perpetual abstinence from all flesh and white meat, except in case of grave illness and by order of a physician. The order is also discalced in character. The Minim habit is of coarse black wool, with broad sleeves, a scapular or hood (capuccio) and a thick black cord (with four knots that signify the four vows) with a tassel to gird the robe. The Minim order spread throughout Italy in the fifteenth century and was introduced to France in 1482, and later to Spain and to Germany in 1497. The order became particularly active in France, and eventually reached Latin America. It did not, however, establish a presence in England. The order went into a steep decline after the French Revolution, and by the turn of the twentieth century, only 19 convents remained, all but one of them in Italy. However, the German order in Munich brewed beer and the brewery section continued separately. After countless business movements and shuffling about throughout the centuries, the Paulaner brand of beer draws its name from Francis of Paola.