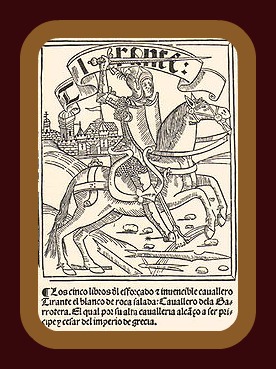 Tirant lo Blanch is a romance written by the Valencian knight Joanot Martorell, supposedly finished by Martí Joan de Galba and published in Valencia in 1490. It is one of the best known medieval works of literature in Catalan, and played an important role in the evolution of the Western novel because of its influence on the author Miguel de Cervantes. Its original spelling was Tirant lo Blanch, although it is now frequently referred by Tirant lo Blanc, according to the modern Catalan orthography (which differs from the orthography used in the original work); a literal English translation of the title would be Tirant the White, the name of the main character of the romance. The spelling of the title is occasionally imbued with political significance due to arguments between those who wish to emphasize the difference between Valencian and Catalan.

Tirant lo Blanch tells the story of a medieval knight Tirant from Brittany who has a series of adventures across Europe in his quest. He joins in knightly competitions in England and France until the Emperor of the Byzantine Empire asks him to help in the war against the Ottoman Turks, an Islamic tribe of invaders threatening Constantinople, the capital and seat of the Empire. Tirant accepts and is made Megaduke of the Byzantine Empire and the captain of an army. He defeats the Turkish invaders and saves the Empire from destruction. Afterwards, he fights the Turks in many regions of the eastern Mediterranean and north Africa, but he dies just before he can marry the pretty heiress of the Byzantine Empire. The loss of Constantinople to the Ottoman Empire in 1453 was considered at the time to be a major blow to Christian Europe. In writing his novel, Martorell perhaps rewrote history to fit what he wanted it to be - which in a way makes it a precursor of the present day genre of alternate history.

Tirant lo Blanch is one of the most important books of Catalan literature. Written by Joanot Martorell in the 15th century, the "Tirant" is a chivalric novel that also appears to have a strong autobiographic component. It tells the feats and adventures of Knight Tirant lo Blanch from Brittany. At times, it parallels the life and adventures of admiral Roger de Flor, a Templar Knight and participant in the last crusade, leader of the Almogavar (Valencian, Catalonian and Aragonese). This historical resemblance is also evident in the description of events occurring around Constantinople and the defeat of Sultan Mehmed II "the conqueror," and ultimately leading to the fall of Constantinople in 1453. Compared to books of the same time period, it lacks the bucolic, platonic, and contemplative love commonly portrayed in the chivalric heroes. Instead the main character is full of life and sensuous love, sarcasm, and human feelings. The work is filled with down to earth descriptions of daily life, prosaic and even bitter in nature. It is considered a major influence for Miguel de Cervantes' book, Don Quixote de la Mancha, which was published in 1605 (Part I) and 1615 (Part II); comparisons between the two show many similarities.[citation needed] Influence is indirectly acknowledged by Miguel de Cervantes (The Trials of Persiles and Sigismunda, III-12) when referring to Valencian as the sweetest language (with Portuguese): "They drew near Valencia (…) Above all they praised the beauty of its women and its fresh cleanliness and charming language, which only Portuguese can compete with in being sweet and pleasant." The similarities in both works can also be appreciated in their critical and skeptical view of the unlikely and exaggerated and fantastic chivalric novels in use at the time. At the time Don Quixote was written, there was probably a Valencian, a Portuguese and a Spanish edition of the Tirant. In the following passage from Don Quixote, the famous "scrutiny of the library" the priest and the barber throw Don Alonso Quijano's (Don Quixote) books onto the bonfire: "God help me!" said the priest in a loud voice, "That we have here the 'Tirant lo Blanch'! Hand it over to me, my friend, for I am telling you that I found on it a treasure of enjoyment and a gold mine of recreation. Here it is Don Kyrieleison of Montalvan, valiant knight, and his brother Thomas of Montalvan, and the knight Fonseca, and the battle the brave Tirante fought with the mastiff, and the witt of damsel Plaerdemavida (Pleasureofmylife - ed. note), and the loves and lies of the widow Reposada (Rested -ed note), and lady Emperatriz (Empress - ed note) in love with the squire Hipolito--in all truth, my friend, by right of its style this is the best book in the world: here Knights eat, sleep, and they die even doing a will, things that all the rest of books of this genre lack. Having said all this, I am telling you that he deserved to have this book written because he did not do as many silly things as to deserve to be thrown to the galleys for the rest of his life. Take the book home and read it, and then you will realize that all I told you about it is true." Later editions of Tirant lo Blanch dropped the final "h" which was commonly used during medieval times.