Urbino was the model Renaissance city, ruled by an ideal court that had been presided over by the House of Montefeltro since the 13th century. Urbino's old section is a walled town that sits atop a hill in the beautiful Marche Region. 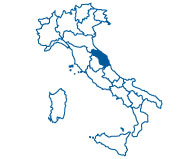 Although there have been artifacts found on Mount Conero dating back 100,000 years, it wasn't until the ninth century BC that the earliest peoples settled the Marche region. The "Picenus," a people of controversial origin, settled in the southern part of the region. Tradition had it that they followed a sacred bird, a woodpecker (in Latin "picus" thus the name "Picenus"). Several necropolis settlements were founded by the Picenus. The people were divided into tribes, each independently ruled and having its own dialect. The Picenus were unable to form a political administration and continued to live in separate city-states. Overpowered by the Gauls and the Athenians in 395 BC, the only remaining memory of these people is the name of the city of Ascoli Piceno.


Urbino and the House of Montefeltro

The city of Urbino is surrounded by the rolling Apennine hills of the Marche region. It is located in central Italy, and was situated between all of the major Italian Renaissance powers. The duchy was bordered by Bologna with Ferrara and Venice to the north, Mantua and Milan to the northwest, influential Florence to the west, and Rome and the other Papal States to the south.

The city was reknowned for its cultured Renaissance court under the Montefeltro duke Federico, as well as his son Guidobaldo, who succeeded his father in 1482. In the 15th century, Duke Federico promoted Urbino's civic development, sponsoring construction which helped define Urbino as a model of the ideal Renaissance town. His Ducal Palace was an ideal model of early Renaissance palazzi. Its design was influenced by the prevailing tastes of the Tuscan nobility. Its architect, 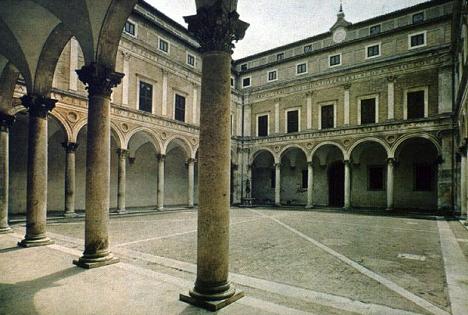 Luciano Laurana, "improved Florentine Renaissance tradition by using a system of columns, pilasters, and arcades to produce elegant facades and spacious rooms. In the arcaded palace courtyard Laurana achieved a rhythmic lightness, amplitude, and sophistication far in advance of contemporary Florentine work." (Wikipedia Article on Laurana). One of the most important monuments in Italy, it is listed as a UNESCO World Heritage Site. Federico and his court cultivated art, architecture, and philosophy so extensively that today we encounter a time-capsule of a medieval palace complex.

Federico was Duke of Urbino from 1444 to 1482. He was considered to be a very formidable condottiero, an excellent diplomat, and a generous patron of art and literature. At his court, Piero della Francesca wrote on the science of perspective, Francesco di Giorgio Martini wrote his Trattato di architettura ("Treatise on Architecture") and Raphael's father, Giovanni Santi, wrote his poetical account of the chief artists of his time. Federico's brilliant court, according to the descriptions in Baldassare Castiglione's Il Cortegiano, set the standards for what was to characterize a European gentleman for centuries to come. 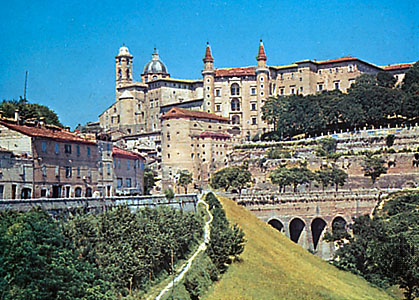 Machiavelli observed that a well-fortified, well-provisioned city is less willingly attacked by outsiders (The Prince, 76). As a city unto itself, the ducal palace at Urbino incorporated a network of subterranean chambers containing vast supplies of food and water, accommodations, and stables for its military forces, as well as occupations (including metalworking) that would provide Urbino's citizens with employment in case of lengthy sieges. The capacity to foresee events is an ability for which Federico gained particular renown: his success as a military commander offered, in Vespasiano da Bisticci's words, "proof of the value of an active chief in settling the plan of campaign, and how on him depends victory and the safety of the state" (Vespasian Memoirs, 90)." [1]


Duke Federico's famous Studiolo is to be found in the Ducal palace at Urbino. This stunning room is where Federico, and later Guidobaldo, collected and displayed a vast and priceless library, as well as many objects of art, music, and invention. The linked article below is a study of the concept of studiolo use. Studioli could function as tools for governance, in addition to their function as wonderful galleries and showplaces, and were something that all Renaissance rulers attempted to build and develop. The collections functioned as much more than outward symbols of prestige and wealth. They advertised the fact that only wise, stable governance permitted such expenditure and leisure activites. They also cemented the idea that the ruler was capable of ensuring a civilizing influence, as well as enforcing justice. The following website is an online tour and analysis of Guidobaldo's studioli in Urbino and Gubbio. In addition to original research, the website includes a multitude of maps, photographs and drawings by the author. 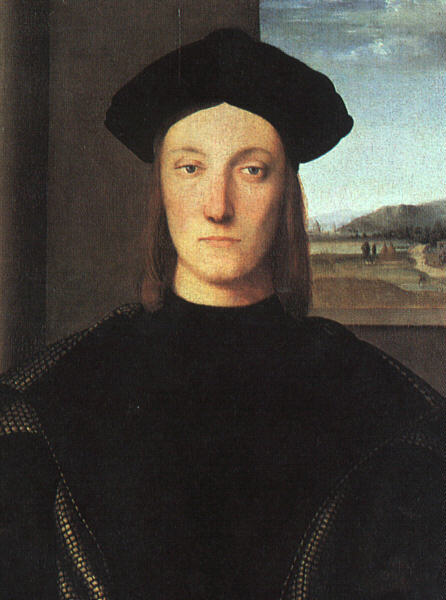 Urbino and the Borgias

Guidobaldo was married to Elizabetta Gonzaga, sister of the Marquis of Mantua - Francesco II Gonzaga. Elizabetta was enshrined in the pages of Castiglione's The Courtier as the model princess presiding over the ideal court. Urbino's learned and devout court gentlemen (and ladies) were the shining examples of their day, and their discourse and activities influenced all European courts and manners for at least 200 years. During Charles VIII's 1494 invasion of Italy, Guidobaldo served as one of Pope Alexander VI's captains of the papal armies. Later, ostensibly under the leadership of Juan Borgia, Duke of Gandia (created Papal Gonfalonier (standard bearer)and Captain General of the Church in 1495) the papal forces were sent to quell the treasonous Orsini rebellions and alignment with the French. At the Battle of Soriano (1497) Guidobaldo was taken prisoner by the Orsini lords. He was eventually ransomed.

In 1502, after several successful campaigns in the Romagna, Cesare Borgia drove the duke and duchess from Urbino, forcing them to take refuge with Elisabetta's brother at Mantua and later at Venice. Cesare Borgia appropriated the Ducal Palace, pilfered its vast treasury of art and manuscripts, and took the title of Duke of Urbino.

After the fall of the Borgias, the duchy was restored to its popular lords, the Montefeltro, and was protected by Pope Julius II during his campaign to retake the papal cities of the Romagna for the church. After the Medici pope Leo X's brief attempt to establish a young Medici as duke, thwarted by the early death of Lorenzo II de Medici in 1519, Urbino was ruled by the Della Rovere dukes. Guidobaldo formally adopted his nephew, Francesco Maria della Rovere (also nephew of Cardinal Giuliano, later Pope Julius II) and upon his marriage to Leonora Gonzaga, daughter of Francesco Gonzaga and Isabella d'Este became the heir-apparent to the duchy of Urbino. As the papal vicars of Urbino - and Guidobaldo's capacity as Captain General of the Papal Arrmy u 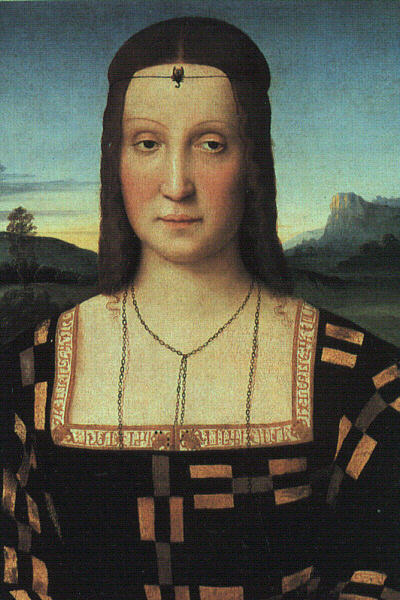 nder two popes - Elisabetta's gentle influence on court manners and protocol, these collectors and patrons of art and literature are an important example of the pinnacle of Renaissance culture. The fine traditions and contributions of this court prepared elite Europeans of the era to open the new door to a new modern age.

In 1626, Pope Urban VIII definitively incorporated the Duchy into the papal dominions, the gift of the last Della Rovere duke, in retirement after the assassination of his heir, to be governed by the archbishop. Its great library was removed to Rome and added to the Vatican Library in 1657. The later history of Urbino is part of the history of the Papal States and, after 1861, of the Kingdom (later Republic) of Italy.

The Book of the Courtier, Baldassare Castiglione:

As everyman knows, the little City of Urbino is situated upon the side of the Apennines (in a manner) in the middle of Italy, towards the Gulf of Venice. The which for all is placed among hills, and those not so pleasant as perhaps some other that we behold in many places, yet in this point the Element has been favourable unto it, that all about, the Country is very plentiful and full of fruits: so that beside the wholesomeness of air, it is very abundant and stored with all things necessary for the life of man. But among the greatest felicities that man can reckon to have, I count this the chief, that now a long time it has always been governed with very good princes, in the common calamities of the wars of Italy it remained also a season without any at all. But without searching further than this, we may make a good proof with the famous memory of Duke Federigo [da Montefeltro] who in his day was the light of Italy. Neither do we want true and very large testimonies yet remaining of his wisdom, courtesy, justice, liberality, of his invincible courage and policy of war...so that we may, not without cause, compare him to many famous men of old time. - The Book of the Courtier by Baldassare Castiglione, Book 1 (Spelling modernised).

The House of Montefeltro Photos