Venice was formally known as "The Most Serene Republic of Saint Mark." 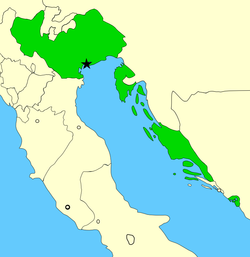 After the 5th century, Venice emerged as a colony of Roman exiles fleeing the successive invasions of Germanic tribes, Huns, and Lombards. Several ports grew up along the coastal area and lagoon to facilitate the growing trade and communication between the Byzantine Empire and the lagoon's ruler, the "dux" (later doge). Located at the top of the Adriatic Sea Venice enjoyed almost complete control of the region's commercial interests; their navy was without rival in the known western world. With the suppression of pirates along the Dalmatian Coast, the city became a flourishing trade center between Western Europe and the rest of the world (notably the Byzantine Empire and the Islamic World). In building its maritime commercial empire, the ambitious Venetian Republic controlled the salt monopoly, ruled of most of the islands in the Aegean Sea, including Cyprus and Crete, and became a major player in power struggles of neighboring kingdoms.

In the first decades of the eighth century, the Venetians elected their first leader Ursus who was confirmed by Byzantium and given the titles of hypatus and dux. He was the first historical Doge of Venice. In 828, the new city's prestige was raised by the acquisition 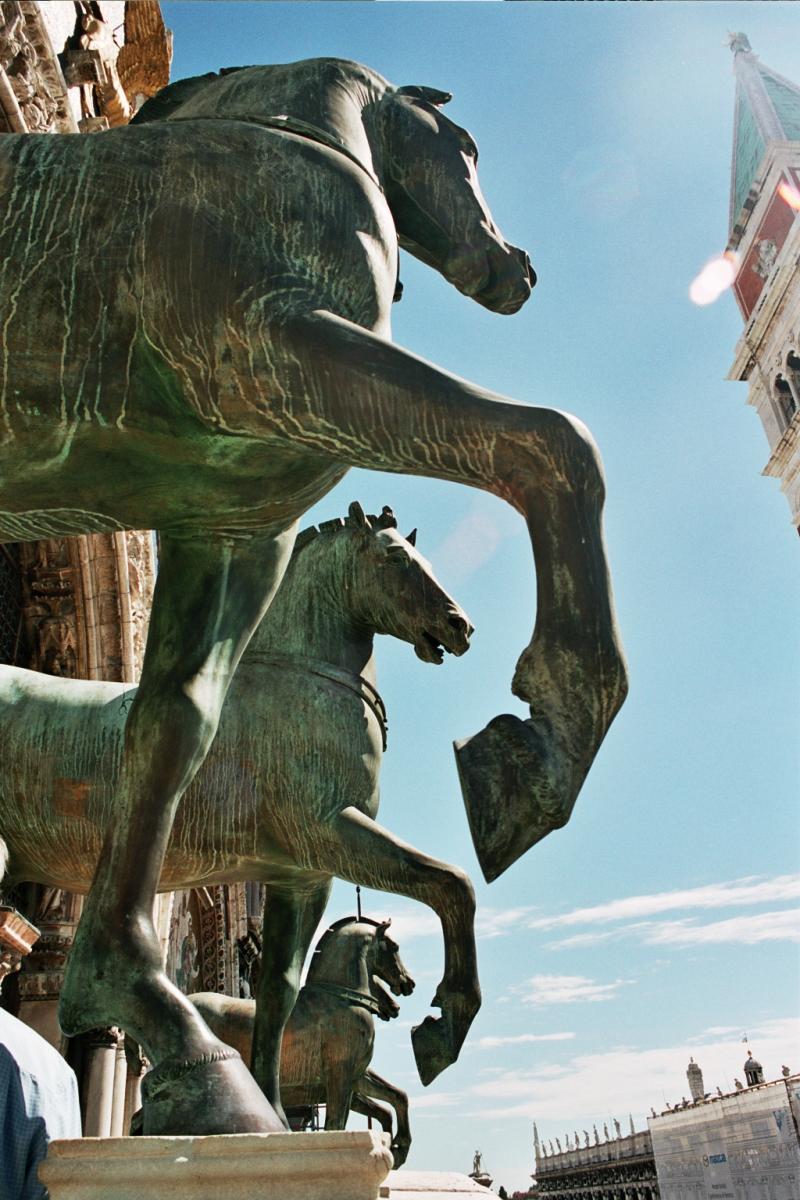 of the claimed relics of St. Mark the Evangelist from Alexandria, which were placed in the new basilica. As the community continued to develop and as Byzantine power waned, it led to the growth of autonomy and eventual independence. From the ninth to the twelfth century Venice developed into a city-state.

Venice During the Middle Ages

The Venetian Empire emerged as a major Mediterranean power following the Venetian-backed Fourth Crusade, which in 1204 conquered and plundered the Capitol of the Eastern Roman Empire (the Byzantine Empire) Constantinople. Some of the treasure and plunder brought back with crusaders included the The Triumphal Quadriga and Horses of Saint Mark (from the Hippodrome of Constantinople), which were now placed atop St Mark's Cathedral in Venice where replicas remain today.

The Republic remained a major power throughout the Middle Ages and had embassies in all of the main centers and urban capitols of Europe and The Near East. By 1300, Venice was the premier maritime empire built upon a long history of trade and commerce. The area was a starting point for many Crusades and invasions of territory held by the empire of the Ottoman Turks. It's commerce was centered on the trade of all luxuries coming to and from the Far East. Spices, silks, medicines, and grain were heavily traded in Venice. The city was at its peak of power and size under doge Francesco Foscari (1423–57). The Peace of Lodi (1454) was concluded to end the wars in Lombardy between Milan and Venice. It also created a balance of the great Italian powers of Milan, Naples, Florence, and Venice, and established the borders between Milan and Venetian mainland territories. 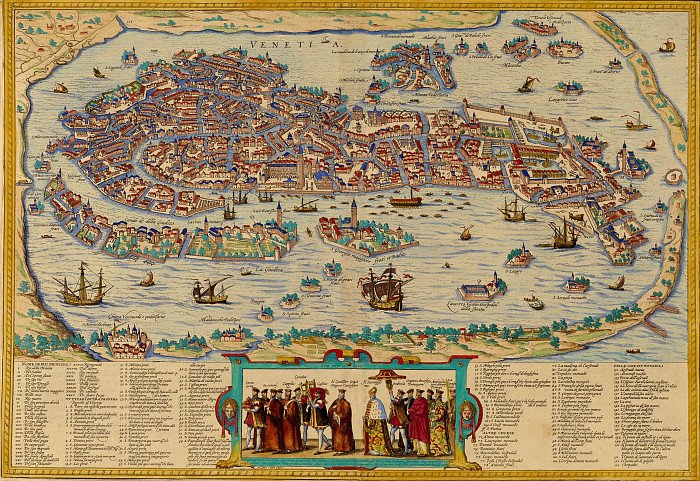 Despite the territorial losses in the wars against the Ottoman Empire, at the end of 15th century, with 180,000 inhabitants, Venice was one of the most populous cities in Europe after Paris and arguably the richest in the world. By the early Renaissance, Venice was the most prosperous city in Europe. At the height of its prestige, might and wealth, it had 36,000 sailors operating 3,300 ships, dominating Mediterranean commerce. During this time, Venice's noble families instigated the building of churches and numerous palazzo in an effort to outdo each other in having the grandest palaces. Their patronage supported the work of the best and most fashionable artists.

Venice had one of the most extensive arts and crafts markets in Europe. Venetian artists and craftsmen were protected by guilds and trained their skills in established academies. the city's merchants, traders, and populace were patrons of the arts as well. The largest supporter of the arts by far, however, was the Doge and the government. Yet even small organizations like the Confraternity of Saint Ursula commissioned oil paintings, large epic cycles with religious themes. One of these was

Vittore Carpaccio's St. Ursula Cycle, an illustration of stories from her life that vividly show the dress, scenery, and interiors of Renaissance Venice. The Venetian school also produced portraiture, sculpture, and building projects that remain some of the finest of the Renaissance period. The culmination of the many artistic achievements in Venice during the late quattrocento have found expression in one of its native sons, the High Renaissance Master of light and color, Titian (Tiziano Vecellio). The innovators of the Italian renaissance Venetian School, brothers Giovanni Bellini and Gentile Bellini were highly acclaimed and in continual demand throughout their careers. From their influence came numerous Venetian masters Tiziano Vecellio, Giorgio Giorgione, Jacopo Tintoretto, Paolo Veronese, and Lorenzo Lotto.

Venice was also the printing capitol of the world by 1482, with the largest printer Aldo Manuzio and his press. They made mass printings of small, bound editions of the classics that could be easily transported. According to historians, he is credited with inventing the "paperback" concept of a portable book.

Other notable features of Renaissance Venice include its vast array of different architectural styles. The prevailing style was Venetian Gothic - form of Gothic that synthesized Byzantine, Moorish, and Gothic styles of the 14th century. It is characterized by the ogee and lancet arch and Arab decorative features like the horseshoe arch. The Porta della Carta (below) is attached to the Doge's Palace, which is the prime example of Venice's Gothic architecture. 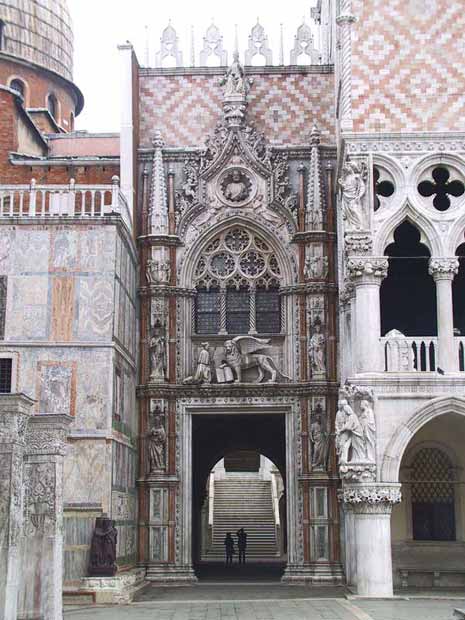 Andrea Palladio was the most famous Venetian architect (1508-1580). Palladio wrote the famous Four Books of Architecture in 1570, and he is primarily known for his use of the ancient Roman styles he revived from Vitruvius's teachings. The Palladian Style is charcaterized by harmony and symmetry.

Venice was ruled by the Great Council, which included thousands of members of the city's nobility.The Great Council appointed all public officials and elected a Senate composed of over 200 people. The Grand Council, or Maggior Consiglio, met in a large hall in the Ducal Palace to conduct electoral sessions much like a republican system where the legislators are elected by a large body of (certain) citizens. A Council of Ten (with an auditing body called the Signoria), controlled much of the administration of the city. One member of the great council was elected Doge - the supreme head of state, who held the title until his death. The traditional corno ducale, or ducal crown, was worn by the doge for state occasions. The word "doge" originally meant duke in the Venetian dialect, derived from the Latin "dux," meaning military leader. The doge was the chief magistrate of the republic, and one of the most powerful rulers in Italy.

Venice and the Borgia

In the late 1490s, Venice could no longer concentrate all her energies on her diminishing foreign territories. Now a territorial power in the Romagna, she had to watch her land frontiers on every side, threatened by the Malatesta (Rimini), the Este (Ferrara), the Bentivoglio (Bologna), and the Borgia (Papal States). Having entered into treaty relations with Florence, Milan, and the Vatican, (The League of Venice) the Republic became continually involved in the internal struggles presaging the first Italian Wars. The condottieri fighting for Venice were all over the map, Lombardy, the Romagna, and the Kingdom of Naples.

Venice's role during the second wave of French invasion, against Milan, contributed to the downfall of Ludovico Sforza and greatly influenced Alexander VI's alliance with the French. After the death of Alexander, and the subsequent removal of Cesare Borgia from his seat of power as Lord of Romagna,Venice encroached the cities of the Romagna (Rimini, Forli, Cesena, and Faenza). In 1504, Pope Julius II began his consolidation of the papal lands and proceeded to conquer all (and more) of the lands brought back to the church by the Borgias. History has given Julius II the distinction of being the most successful expansionist of the Renaissance Popes. The League of Cambrai (1508) under Pope Julius II, which was an effort to separate Venice from its Romagnol possessions (for Julius), Friuli and Veneto (for Emperor Maximilian), and the ports of Apulia (for Spain).


The enormous wealth accumulated during the Middle Ages set the stage for a flourishing of the arts and sciences of the Italian and High Renaissance periods. Venice was an international power, a leading cosmopolitan center, and was (still is) held to be one of the finest cities ever built by man. Its architectural wonders are so numerous that the entire city and its Lagoon is a UNESCO World Heritage Site.